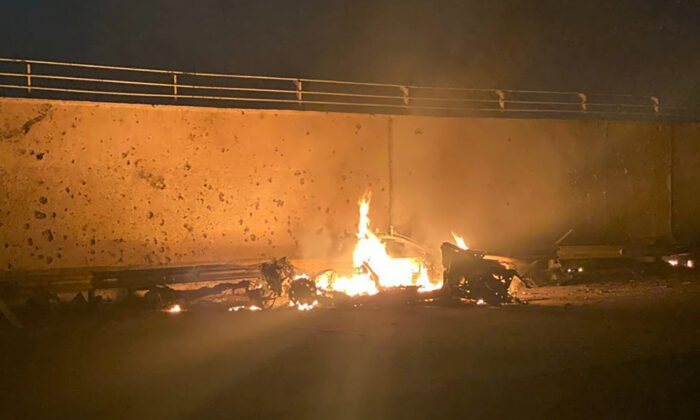 The State Department urged Americans to leave Iraq on Jan. 3 after the killing of the Iranian regime’s top military official, Qassem Soleimani, near Baghdad International Airport.

“Due to heightened tensions in Iraq and the region, we urge U.S. citizens to depart Iraq immediately. Due to Iranian-backed militia attacks at the U.S. Embassy compound, all consular operations are suspended,” the alert from the department stated.

“U.S. citizens should not approach the Embassy.”

U.S. citizens in Iraq or those concerned about loved ones in Iraq were told to contact the State Department by phone and to avoid the U.S. Embassy in Baghdad. They were also advised to follow local and international media outlets for updates on the situation.

#Iraq: Due to heightened tensions in Iraq and the region, we urge U.S. citizens to depart Iraq immediately. Due to Iranian-backed militia attacks at the U.S. Embassy compound, all consular operations are suspended. U.S. citizens should not approach the Embassy. pic.twitter.com/rdRce3Qr4a

The alert came two days after the State Department issued a travel advisory telling Americans not to travel to Iraq, citing “terrorism, kidnapping, and armed conflict.”

“U.S. citizens in Iraq are at high risk for violence and kidnapping. Numerous terrorist and insurgent groups are active in Iraq and regularly attack both Iraqi security forces and civilians. Anti-U.S. sectarian militias may also threaten U.S. citizens and Western companies throughout Iraq. Attacks by improvised explosive devices (IEDs) occur in many areas of the country, including Baghdad,” the department stated.

Attacks on the embassy forced it to suspend public consular services.

“At the direction of the President, the U.S. military has taken decisive defensive action to protect U.S. personnel abroad by killing Qasem Soleimani, the head of the Iranian Revolutionary Guard Corps-Quds Force, a U.S.-designated Foreign Terrorist Organization,” the Department of Defense said in a statement.