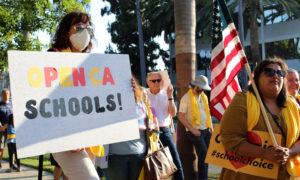 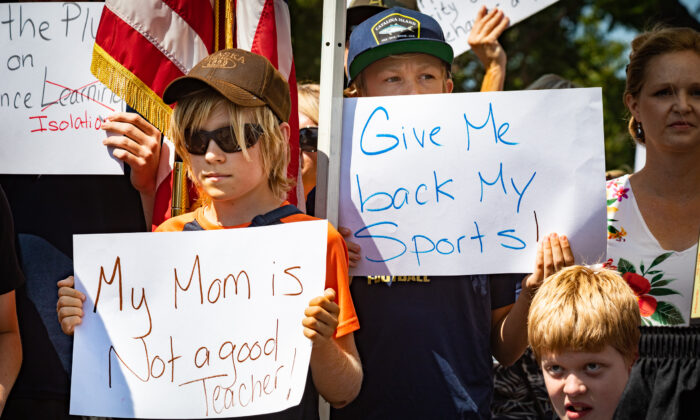 Parents and students gather at a protest supporting a lawsuit calling for the immediate reopening of schools in front of the Orange County Department of Education building in Costa Mesa, Calif., on Aug. 26, 2020. (John Fredricks/The Epoch Times)
Southern California

LOS ANGELES—Gov. Gavin Newsom and legislative leaders will announce a multibillion-dollar deal March 1 aimed at enticing schools to resume in-person instruction for young students by April 1, but union demands for COVID vaccinations of teachers and reduced transmission rates make it unlikely that LA Unified will meet that date.

According to reports out of Sacramento, the deal—which still needs formal legislative approval—would create a $2 billion incentive pool, with money doled out to schools that reopen campuses for students in kindergarten through second grade, as well as high-need students of all ages.

Schools that fail to open by April 1 will lose 1 percent of their portion of the funds for every day they miss the deadline.

The money would be available to schools in counties that have an average daily new COVID case rate of fewer than 25 per 100,000 residents. Los Angeles County and other Southern California counties meet that goal, although all remain in the most restrictive “purple tier” of the state’s COVID reopening roadmap.

Under existing state guidelines, schools in counties that meet the 25 cases per 100,000 residents threshold are authorized—but not required—to resume in-person classes for students in pre-kindergarten through sixth grade.

Under the proposed legislative incentive package being announced March 1, schools in counties that advance out of the state’s “purple” tier and into the less-restrictive “red” tier—with a new COVID case rate of 7 per 100,000 residents and positivity rate less than 8 percent—would be required to open all elementary grades and at least one middle or high school grade to qualify for the incentive funds.

The legislative package also includes another $4.6 billion in general funding for all schools to help fund required safety improvements on campuses and make up for learning time lost during the pandemic.

While the goal of the legislation is to get young students back to campus by April 1, the Los Angeles Unified School District (LAUSD) is unlikely to meet that date. District Superintendent Austin Beutner has set a target date of April 9 for reopening elementary schools, but the powerful teachers’ union—United Teachers Los Angeles (UTLA)—has not agreed to that date, which it says is subject to labor talks.

The union is demanding that all teachers and school staff be vaccinated before they return to in-person instruction. It also doesn’t want campuses to reopen until Los Angeles County moves out of the “purple” tier.

Union officials argue that while the countywide transmission rate has dropped below the 25 per 100,000 residents threshold, many neighborhoods the LAUSD serves are lower-income, and have rates that are three times as high.

UTLA’s membership is voting this week on a proposed statement of opposition to reopening campuses, saying in-person instruction can’t resume until the county is in the “red” tier, all school staff returning to in-person work “are either fully vaccinated or provided access to full vaccination,” and safety measures are in place at schools such as protective equipment, social distancing, ventilation and “a cleaning regimen.”

Beutner has supported the union’s call for vaccinations before a return to classes. Teachers and other school staff in Los Angeles County became eligible for COVID vaccines on March 1, with the LAUSD even operating a vaccination site dedicated to education workers at SoFi Stadium in Inglewood.

Even with LAUSD expected to receive about 40 percent of vaccine doses in the county set aside for education workers, it’s unlikely that all elementary school teachers will be vaccinated in time to meet Beutner’s proposed April 9 date for school reopening, much less the state’s new April 1 date.

The Los Angeles Times reported on March 1 that the state plans to earmark enough vaccine to the LAUSD by the end of next week to get its staff inoculated and reopen elementary schools. Beutner has previously put that number at 25,000 doses.

But even if the district does receive enough doses, it still wouldn’t meet the union demand that schools remain closed until the county emerges from the “purple” tier. Los Angeles County’s COVID case rates have been dropping dramatically following a winter surge, but it’s unclear when it might be able to advance to the “red” tier.