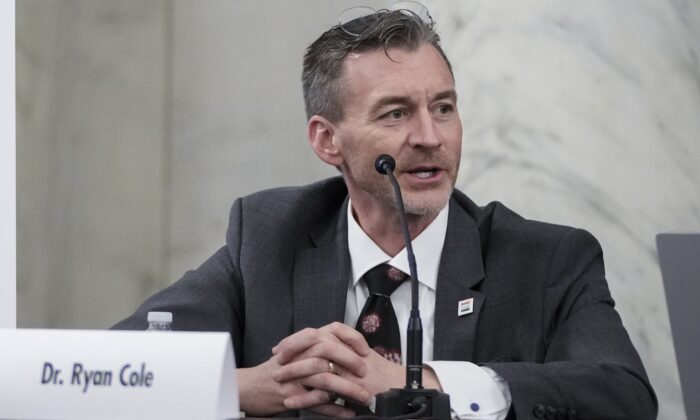 Dr. Ryan Cole speaks during a panel discussion on COVID-19 on Capitol Hill in Washington on Jan. 24, 2022. (Drew Angerer/Getty Images)
By Zachary Stieber

Washington state’s medical commission has brought charges against Dr. Ryan Cole, a pathologist, over alleged false and misleading statements about COVID-19 vaccines and his prescribing of ivermectin to treat COVID-19.

The Washington Medical Commission announced the allegations on Jan. 18 against Cole after receiving complaints about Cole’s conduct.

Cole lives in Idaho but is licensed in Washington state.

The state alleges that Cole made “numerous false and misleading statements” during the COVID-19 pandemic about the pandemic, vaccines, ivermectin, and the effectiveness of protective masks.

The statements “were harmful and dangerous to individual patients, generated mistrust in the medical profession and in public health, and had a wide-spread negative impact on the health and well-being of our communities,” the commission said.

Cole also provided “negligent care” to four patients by prescribing ivermectin, which is “not indicated for a COVID-19 infection,” according to a statement of charges.

Cole has until Jan. 30 to file a response to the charges, according to the commission. Cole will have a chance to defend himself against the allegations at a hearing.

The commission is a licensing authority. The charges can lead to the suspension of Cole’s license.

Washington state authorities say that Cole’s alleged false and misleading statements include claims that the COVID-19 vaccines have caused more deaths than COVID-19 and that the vaccines can lead to cancer and infertility.

Cole, the founder of Cole Diagnostics, has said in interviews with The Epoch Times and other outlets, as well as during public presentations, that he observed a spike in unusual cancers and other problems after the messenger RNA COVID-19 vaccines were introduced in late 2020. He asserted that heart inflammation is known to be caused by the shots, as well as other issues not proven to be linked, that stem from introducing the spike protein into the human body.

“The naysayers [say], Oh, the spike isn’t … [a] toxin,” Cole said during one interview with The Epoch Times “American Thought Leaders.”

Cole has also said COVID-19 vaccines are “fake” and referred to vaccination with them as “needle rape,” the commission noted.

Some of the statements the commission referenced as “false and misleading: were actually accurate. Among them: Cole’s noting that natural immunity, or post-infection immunity, against COVID-19 is superior to the protection bestowed by vaccines. That’s been shown or indicated in many studies, including a study from the U.S. Centers for Disease Control and Prevention and a paper from Israel.

According to the commission, Cole said it in a written statement in 2022 that he has not advised people not to get a COVID-19 vaccine.

Cole was part of MyFreeDoctor.com, according to archived versions of the website. The website is a telehealth service that enables doctors to correspond with and see patients remotely using the internet. The charges say Cole treated patients for COVID-19 over a “virtual telemedicine platform.”

Cole prescribed medicine to four patients after reviewing their records and speaking with them over an instant chat function on the platform, according to authorities. He prescribed ivermectin multiple times. Ivermectin is approved by the U.S. Food and Drug Administration to treat conditions caused by parasitic worms but the administration says it should not be used against COVID-19, though some of the studies it cites actually support its use.

Cole’s treatment of the patients, including not documenting “appropriate medical decision-making” for them, constituted unprofessional conduct, according to the commission.

State law defines unprofessional conduct as “the commission of any act involving moral turpitude, dishonesty, or corruption relating to the practice of the person’s profession, whether the act constitutes a crime or not.”

Cole has told The Epoch Times in previous interviews that he has seen 500,000 patients in his 26-year career and has never had a patient complain about him or file a lawsuit.

“Now all of a sudden I find myself in the crosshairs for sharing science. Because of that, I lost one of my major insurance contracts for my ‘unprofessional behavior’ of talking about ivermectin and helping save a handful of lives with that for free. I never charged a patient,” he said.