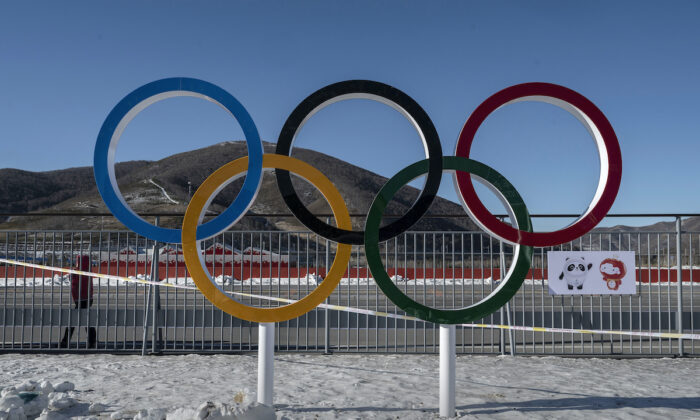 The Olympic Rings are seen inside one of the Athletes' Villages for the Beijing 2022 Winter Olympics before the area was closed in Hebei Province, northern China, on Jan. 3, 2022. (Kevin Frayer/Getty Images)
Chinese Regime

Former Chinese national sports team doctor Xue Yinxian revealed China’s General Administration of Sport had been widely doping Chinese athletes. The whistleblower’s new book—containing extensive evidence on this—will be published before the Beijing Winter Olympics as a reminder to the international community that the Chinese Communist Party (CCP) is violating not only human rights but also the spirit of the Olympics, Xue’s son said.

Xue wrote 68 work diaries from 1978 to 1985 when she served as the head of medical supervision in the Training Bureau of China’s General Administration of Sport. In 2017, Xue fled China with her diaries, and she is now living with her son Yang Weidong in Germany.

Yang, who assisted his mother with the new book entitled “China’s Drug,” told the Chinese-language Epoch Times that in addition to the doping cases that have been detected, the table tennis team, women’s volleyball team, gymnastics team, badminton team, etc.—as long as they belong to the 11 teams under the main control of the State General Administration of Sports and the Training Bureau—all are requested to consume performance-enhancing drugs.

“The ‘scientific training’ proposed by the Training Bureau of the CCP’s National Sports Commission is in essence ‘doping training,’” Yang said.

On Oct. 11, 1978, Chen Xian, then vice director of the General Administration of Sport, chaired a meeting of the administration’s medical department, which Xue attended as a doctor for the basketball team. At the meeting, Chen said that performance-enhancing drugs were being used abroad, so “why can’t we use them?”

At that time, China had just come out of the Cultural Revolution and was facing a severe shortage of materials—even food needed to be bought with rationed tickets. Because of that, the sports department regulator would think the only way for Chinese athletes to get fit and compete in the international arena was to rely on doping substances.

Since then, the history of Chinese athletes taking banned drugs began, Yang said.

Yang told Radio Free Asia on Jan. 6 that the first application of banned doping was in the table tennis team, weightlifting team, track and field team, and swimming team. Then in the later stages of the trial, all athletes were doping.

In 1982, Luo published two articles on iron tablets (ferrous sulfate) for athletes in the Chinese journal Sports Science, naming Lang Ping, the famous Chinese women’s volleyball player, as the one who took the doping.

“She [Lang Ping] was only in her 20s in the 1980s, so how could she afford to fight the system’s demand for taking doping? “said Yang.

Those athletes take 600-800 mg a day and cannot digest the iron, which will be deposited in their bodies for many years before health problems arise. And some who have doped suffered side effects such as unexplained headaches, body aches and pains, and sports injuries that would not otherwise occur, Yang said.

An average person’s daily intake of iron is about 11.5–18.9 mg based on different age stages and gender, data by the U.S. National Institutes of Health shows.

In November 1987, Xue published an article in a gymnastics magazine, analyzing the case of Li Donghua, who was an athlete of the Chinese gymnastics team, after doping continuously for one month. One day, he ruptured his Achilles tendons in both feet when he did a backflip and landed. According to Xue, this is a side effect of doping: the blood vessel walls become very fragile and the Achilles tendons rupture with the slightest external force.

In 2008, Chinese athlete Liu Xiang, the world’s first Grand Slam athlete in the 110m hurdles, ruptured his Achilles tendon. Xue found, through Liu’s entire description of treatment, that it was the same cause as Li’s case.

Artificial Insemination for Androgens, Abortion After Winning a Medal

Besides having athletes dope, Yang also recalled a case about the CCP enhancing athletes’ androgens through artificial insemination. In 1995, Deng Yaping, a multiple world champion in table tennis, was artificially inseminated before competing in a world championship. After getting pregnant, her body’s androgen level increased, and then she had an abortion after the tournament.

As the revelation was too shocking, Epoch Times reporters asked experts and athletes for professional advice.

Mr. Yu, a former Chinese cyclist living in New Zealand, said pregnancy does increase the number of androgens in the body. But once the female athlete has an abortion, her body goes down also, which is actually a very cruel way to tap into the human body’s potential.

Yu said he was not surprised to learn that because he heard of similar brutal methods, such as the blood exchange method commonly used in cycling and similar endurance competitions.

Dr. Yang Si, a medical doctor at the University of Tokyo, told The Epoch Times that he had not heard of this method, but it is possible that after a woman is pregnant, many compounds are produced in the blood, and these substances may mask the ingredients of those stimulants.

Dr. Yang further explained that because stimulants are also organic compounds, if the compound produced after pregnancy is close to the stimulant taken, then it can mask the performance-enhancing drug. The testers would think it is caused by pregnancy, which is called a “false positive” in medical science and it’s very common.

If there are specialized biologists to study what substances women produce after pregnancy, it is also possible to choose the same kind of stimulant to make athletes take, Dr. Yang said.

Xue’s Family Suffered From the CCP’s Persecution for Decades

Xue, 84, was part of the first generation of sports medicine experts after the CCP founded its regime, serving as the doctor for the national team in the 1980s. Since the late 1970s, when the Communist Party launched its state-sponsored doping craze, Xue has been a rare public opponent of the system. On the eve of the 1988 Seoul Olympics, Xue refused to administer stimulants to sports stars such as Li Ning. As a result, Xue and her family suffered decades of suppression from authorities.

In December 2007, Yang’s father died after being attacked at his home by the General Administration of Sport, and in 2015, Yang was arrested for protesting his father’s death to the administration. In 2016, Xue became seriously ill but failed to receive medical treatment. In 2017, Xue, her son, and her daughter-in-law escaped from China and arrived in Germany, and chose to go into exile.

In the interview, Yang told Radio Free Asia that his mother’s courage to criticize and resist was due to her professional ethics as a doctor.

“She was thinking that the athletes were taking stimulants that would cause physical damage to these young children 20 years later.”

Epoch Times reporters couldn’t reach the athletes mentioned in the article, and several calls to the phone number listed on the website of China’s General Administration of Sports went unanswered.

Ellen Wang contributed to this article.