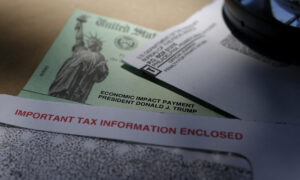 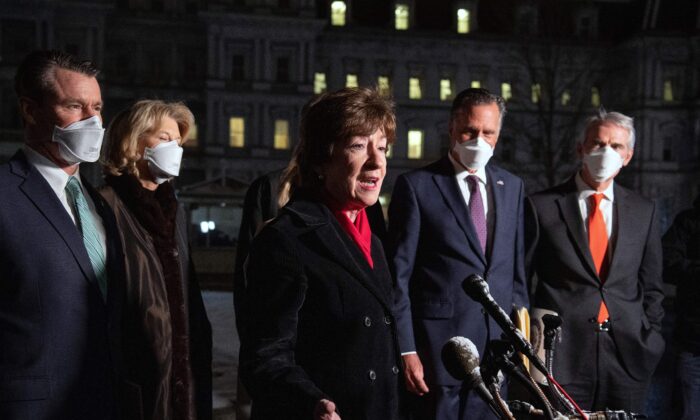 WASHINGTON—Democrats and Republicans are far apart in their proposals for the next COVID-19 relief plan, and funding for states and localities remains one of the biggest differences, as in previous talks. While Democrats want to bail out states, tax revenue data shows that states have actually fared better than expected, raising the question of whether a large federal stimulus is really needed.

In his first week in office, President Joe Biden announced a $1.9 trillion rescue plan to combat the economic downturn and the pandemic. The new administration’s plan includes $350 billion in emergency funding for state and local governments to help them meet budget shortfalls.

A group of 10 Republican senators proposed spending $618 billion for the relief package, which is about one-third of Biden’s plan. The Republican proposal offers no aid to state and local governments.

Sen. Mitt Romney (R-Utah), one of the lawmakers who put forward the GOP plan, told reporters that any funding for states and local governments should be “based on actual need as opposed to a simple blanket payment of billions of dollars, which in many cases would represent a windfall.”

Disagreement over state and local aid has been a major contention in Congress, which caused delays in previous negotiations last year. Republicans have accused Democrats of attempting to bail out blue states that have a long history of fiscal problems.

State and local revenues are normally vulnerable to economic downturns. However, income tax revenue data showed that the fiscal impact of COVID-19 on state and local governments wasn’t as bad as predicted.

According to a report by J.P. Morgan on Jan. 29, of the 40 states that report personal income taxes, collections rose by 1.3 percent in 2020 compared to the previous year. The weighted average growth was 2 percent, and more than half of the states reported positive growth, including California (5.4 percent), Illinois (1.4 percent), and New York (0.5 percent).

“Seeing as income tax makes up a significant portion of total tax revenues for many states, this signals stabilization in tax revenue, especially as the labor market has rebounded somewhat in recent months,” Peter DeGroot, managing director of J.P. Morgan’s municipal research, wrote in a report.

A Brookings Institute study in September 2020 predicted that state and local income tax revenues would be resilient despite the pandemic “because employment losses have been unusually concentrated on low-wage workers,” whose income tax payment is lower compared to high-wager earners.

In addition, the rally in the stock market has sustained capital gains taxes, and fiscal stimulus (unemployment benefit and grants to businesses) provided by the federal government has shored up taxable income.

The JP Morgan report also showed that across the 46 states, sales tax collection improved from earlier data in September 2020. Full-year sales tax revenue across states in 2020 declined only 0.26 percent on average compared to 2019.

State tax receipts in 2020 for the 47 states showed an average decline of only 0.12 percent compared to 2019, with a weighted average drop close to zero. Overall, 21 of 47 states show positive year-on-year growth of tax receipts, according to the J.P. Morgan report.

Despite the pandemic, some states saw unexpected budget surpluses due to federal aid and a rise in state tax revenues. Michigan is one of them. For the 2020 fiscal year, the state is expecting to have a $3.7 billion balance left over, according to The Detroit News.

The total cost of five previous COVID-19 relief bills passed over the past year amounts to $3.7 trillion, and, according to a report by economist Stephen Moore, “the feds still haven’t spent at least $1 trillion of the money.” The remaining funds include $58 billion for state and local aid, he stated.

In a Feb. 2 statement, the U.S. Chamber of Commerce called for bipartisan compromise in the pandemic relief bill and urged lawmakers to avoid pursuing long-sought policy goals such as raising the minimum wage, proposed by Democrats.

“Between the two sides there is more than enough common ground for an agreement. If the majority insists on pushing through legislation using reconciliation then they risk future success on long-overdue priorities including infrastructure, immigration reform, and climate change,” the statement reads.

“Any relief package should be timely, targeted, and temporary, and laser-focused on confronting the current crisis. It should not be used as an opportunity to enact long-sought permanent policy changes.”

The White House has signaled that the administration is open to negotiation on funding for states and localities.

White House press secretary Jen Psaki said at a Feb. 3 press conference that Biden would “certainly welcome an offer” from Republicans if they have a proposal for state and local government funding.