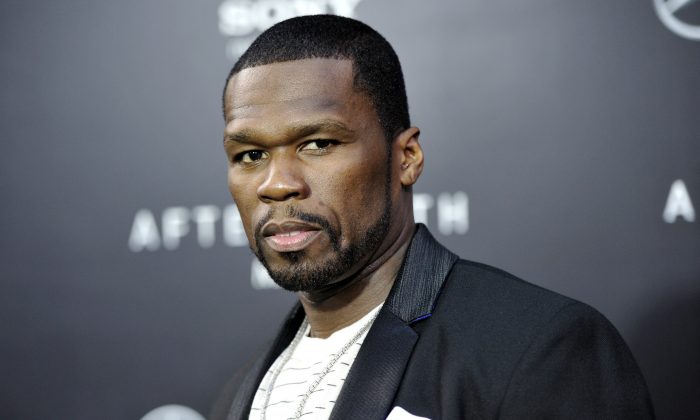 Rapper Curtis "50 Cent" Jackson attends the "After Earth" premiere at the Ziegfeld Theatre, in New York, May 29, 2013. Jackson has been charged with attacking his ex-girlfriend and trashing her Los Angeles condo last month. City Attorney Mike Feuer said Wednesday, July 3, 2013, the 37-year-old "In da Club" singer is charged with domestic violence and vandalism. (Photo by Evan Agostini/Invision/AP)
Social Media

An article saying the Starz TV channel canceled the second season of “Power,” which features and was produced by Curtis “50 Cent” Jackson, is nothing more than a hoax.

The bogus article was posted on Cream Bmp Daily, a self-described “satire” website.

It says: “Stars announced they will be cancelling the second season of hit show ‘Power’ until further notice due to creator and star 50 Cent pulling out due to an upcoming G-Unit reunion tour.

It also includes bogus quotes from Omari Hardwick and 50 Cent.

A disclaimer says the stories published on the site aren’t real and shouldn’t be taken seriously.

“All reports and other information on this page may or may not be 100% accurate. It’s not news, it’s entertainment. All other comments are my personal opinion, but try not to take [it] seriously and come at me with that … because I will and do sue,” it also says.

The fake “Power” article was being heavily shared on Facebook and other social media sites on Monday, with thousands of “likes.”

According to Zap2it.com, “Power” had “strong viewership among White and African-American viewers – both male and female audiences (18-49)” in its first season.”

“With new episode weekend viewership growing throughout the season, “Power” is averaging about 4 million viewers per episode across all platforms including STARZ linear, STARZ ON DEMAND and STARZ PLAY,” it added.

Author guards fan favorites in TV’s ‘Outlander’
NEW YORK (AP) — When she first saw raw scenes from the TV adaption of her “Outlander” book, Diana Gabaldon caught something. It was a line of dialogue she says her “fans consider iconic,” one they would miss and that had been left out.

The line, from 18th-century Scotsman Jamie Fraser to protagonist Claire Randall: “Ye need not be scairt of me. … Nor of anyone here, so long as I’m with ye.”

Gabaldon says she told producers, “No, you have to say that.” And they did.

The author of the 1991 bestselling romance novel about a time-travelling nurse says it was an example of the collaboration between her and Ronald D. Moore, executive producer of the series that premieres on StarzAug. 9 at 9 p.m. EDT. He was the first person, Gabaldon says, to show her a screen adaptation of the book “that didn’t make me turn white or burst into flame.”

She says Moore and producing partner Maril Davis slowly brought her into the process. First they showed her footage, then scripts and then edits. They invited her to his Pasadena production office and a studio built for “Outlander” in the Scottish town of Cumbernauld, where she sat in on a table read and filmed a cameo.

Of the cameo, Gabaldon says, “I’m not allowed to tell you who I am or what I’m doing, but it is in episode four.”

The author says to her surprise, the producers have “very kindly” taken her opinions into account “even though they’re under no legal compulsion to do so.”

That’s fine for Gabaldon, who says her biggest concern was “what would happen to the material.” She says she became nervous after author-friends like John Irving shared some of their adaptation horror stories.

She says Moore’s adaptation works, because he’s doing a 16-part TV series as opposed a film.

“It is absolutely impossible to jam a book of that size and complexity into a two-hour movie and have it look anything like the original,” says Gabaldon. “It can’t be done.”

Gabaldon says there are some changes in the TV series but “there’s nothing in there that’s inconsistent with the books.” She predicts fans will love the TV series as a well, calling it a “good, convincing realization of ‘Outlander.'”