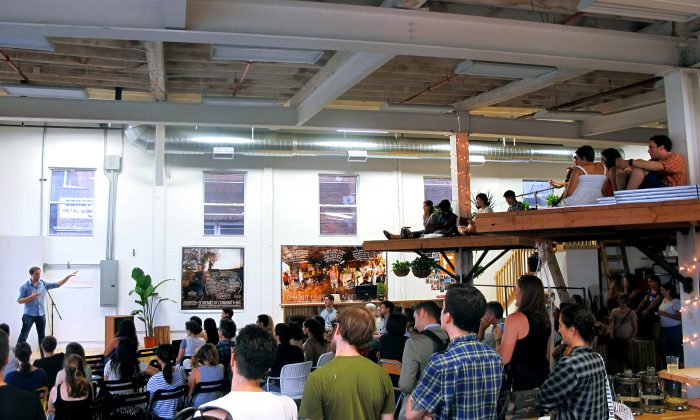 Startup Sees Brooklyn as the Forefront of Artisanal Foods

NEW YORK—Entrepreneur Benzi Ronen wants Brooklyn to be the capital of creative food.

Being at the forefront of food manufacturing in the city and known for artisanal foods, Brooklyn is already well on its way. But like many others, Ronen believes the food system is in crisis and the solution lies somewhere at the intersection between food and tech—a solution that could arise from something like a food capital.

Farmigo already has an office in DUMBO, but Ronen felt it was too pristine. He wanted something a bit grittier, edgier, and welcoming. “We want to build communities,” Ronen said. “Food and community are the same thing—coming together, breaking bread, that’s what it means.”

Farmigo works with local producers such as farmers, fishermen, and bakeries, and connects them directly to the consumer. Anyone can start a private or public community by hosting a pickup location. The result is what looks like a virtual food co-op where members can order whatever is in season with the promise of receiving it within 48 hours of harvest.

By hosting one in his Park Slope apartment building, Ronen not only met his neighbors but his young daughter was able to make friends with the other children, who visit every time his neighbors pick up their food orders.

The canal-side location is a playful open space with wooden planks, swings, hammocks, and Thursday evening it was filled with food entrepreneurs.

Ronen said he is not a foodie; he’s a tech entrepreneur from Silicon Valley and all he wants is to see Brooklyn become synonymous with food the way Silicon Valley has been with tech. And like how NY Tech Meetup was fundamental to creating a tech community in the city, Ronen hopes the monthly meetups Farmigo hosts will inspire more people to start their own food ventures.

Taking a cue from the storytelling podcast “The Moth,” Ronen chose the theme of Storytelling: Through the Fire, for the meetup launch. Four food business starters stood up to tell stories not of their success, but the biggest failures they had run into and overcome.

“Basically, my head got bigger than my britches,” said Erin Fairbanks, executive director of Heritage Radio Network, a nonprofit network of food and culture. Fairbanks stood up on stage to tell a story of mistakes she made as an amateur.

Brooklyn Winery co-founder Brian Leventhal shared a story of when he showed up to the winery to find firemen hacking down a wall to stop an electrical fire, on a day when they needed to host a wedding in the evening. Plated’s co-founder Josh Hix told the group about a refrigeration nightmare that gave his partner pneumonia, and Haven’s Kitchen founder Alison Cayne’s story about the complex building permit process illustrated how her passion for food overrode her complete lack of business sense in running her culinary kitchen and school.

By listening to other’s journeys, Ronen hopes people who come to the meetup will leave with the thought, “Oh, I could do that.”

“It’s all about storytelling,” Ronen said. “If you want to change how people look at food, you have to tell stories.”

According to Crain’s New York Business, food and grocery e-commerce startups have raised close to half a billion in venture capital this year.

From 2009 to 2013, food-manufacturing establishments have grown 12 percent in Brooklyn. The resurgence of light manufacturing in the city has been in part due to an increasing concern for ethics by the consumer. People care about where their products are sourced and made, and artisans are responding to it, said Inessa Lurye, vice president of product for Farmigo. “There’s been a crazy resurgence of artisans.”

On the producer side, farmers are more than happy to get on board with e-services like Farmigo, because it cuts out the middleman and they are able to connect directly with consumers. It also reduces the potential waste of going the farmers market route, because all orders come from direct sales.

“We’re seeing a lot of young farmers from multigenerational farms,” Lurye said. They tend to be college graduates who come home and realize they want to continue the family business, to make it more efficient, and integrate technology.