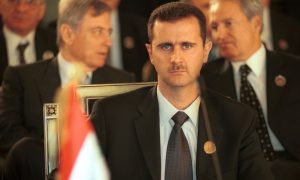 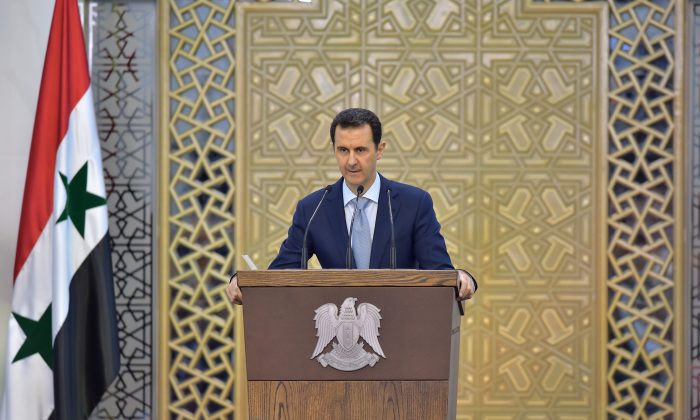 Listening to Syria’s state media is usually a predictable chore. There are daily declarations of military victories over the enemy and talk of the “heavy losses” suffered by terrorists. Perpetual progress is being made in economic development and food and electricity is always being provided. The Syrian people always stand behind a just and legitimate government. All this despite more than four years of conflict.

Still, it is useful to watch and listen. One can always read between the lines to see where the victories are far from complete, where progress has not been smooth, where the support of the people has been manufactured.

And then there are the moments when the mask slips completely to reveal the extent of the fear that dogs the Assad regime.

In a speech on July 26, Assad’s mask slipped completely. Later, state-run media SANA tried to downplay what had been said, but there was no mistaking it.

Just such an incident happened on July 26 in most dramatic fashion when President Bashar al-Assad delivered a speech on state TV. State news agency SANA later tried to downplay what had been said, but there was no mistaking it.

Here was a desperate president not only conceding defeats to rebel forces but admitting that he could never hope to regain rule of all of Syria. He was appealing for men to join a depleted military, begging Iran and Lebanon’s Hezbollah to prop up his troops and economy, and asking his supposedly devoted Syrian people not to abandon him.

In May while Syria’s military withdrew from its last positions in Idlib Province in northwest Syria, Assad was signaling a turning point in the war: the president can no longer win it, but can only hope to avoid defeat.

The prequel to this speech came in early May when Assad made an address on Martyrs’ Day.

Rebels had swept through almost all of Idlib Province, advanced in the south along the Jordanian border, and threatened to move on the divided city of Aleppo. For the first time, the president diluted the daily headlines of victory:

“When one is talking about a war as vicious as the one taking place in Syria, then this involves thousands of battles, and it’s natural for this type of battle, with the numbers and conditions involved in them, to have them shift between attack and defense, wins and losses, and ups and downs, but the important thing is for faith in the inevitability of victory to remain unchanging.”

In his more recent speech, he went further. Victory, he appeared to admit, is no longer inevitable in some parts of the country:

“Sometimes, in some circumstances, we are forced to give up areas to move those forces to the areas that we want to hold onto. We must define the important regions that the armed forces hold onto so it doesn’t allow the collapse of the rest of the areas.”

This reference to other “areas” is an implicit acknowledgement that Syria has been partitioned. Assad recognizes that rebel victories in the spring of 2015 mean that he has lost control of not only the northwest but other areas of the country, and that the opposition is likely to make further advances.

Following the initial defeat in Idlib, the Syrian political and military leadership—reportedly with the participation of Gen. Qassem Soleimani, the head of Iran’s Quds Forces—discussed holding a line of defense from Latakia Province on the Mediterranean through Homs in central Syria to Damascus and the Lebanese border.

That defense line would include almost all Alawites, the group to which Assad belongs and which has been privileged by the 45 years of rule by the president and his father Hafez. It would consolidate a buffer zone for Hezbollah and maintain a link between Iran and the Lebanese organization. However, it would not include Aleppo, Syria’s largest city, or the rest of northern and eastern Syria—an area running from the Mediterranean along the Turkish border to the frontier with Iraq.

Everything is available [for the armed forces], but there is a shortfall in human capacity.
— Bashar al-Assad, president, Syria

Yet Assad was soon confessing that even this line might not be held. In his July speech, he acknowledged for the first time that his military faces crippling shortages of manpower: “Everything is available [for the armed forces], but there is a shortfall in human capacity.”

In recent months, Syrian authorities have stepped up detentions at checkpoints to enforce conscription and raised the maximum age for service to well over 40. There are reports of raids on houses to seize more men for the battlefield. Earlier in July, Damascus announced the creation of new brigades, offering salaries well above the average soldier’s income and seeking commitments of at least two years.

Now Assad has granted amnesty to everyone that deserted or defected from the Syrian military during the four-year conflict, hoping they might return to the army.

Despite all this, Assad still seemed unsure of his ability to maintain a force to check the rebellion. So he turned to Iran and Hezbollah. Against the grain of rebel victories, Hezbollah has pressed an offensive eastward from the Lebanese border, taking much of the Qalamoun region.

However, Assad may be facing uncertainty over Iran. Tehran has already poured billions of dollars into Damascus and has been evading requests for another $6 billion for months. There are reports that some in the Iranian regime are warming to the idea of losing Assad, as long as the Syrian state is protected.

Still, a partition backed by Iran and Hezbollah was the only option Assad could present to his audience. He rejected negotiating with the opposition to find a resolution, arguing that any solution that doesn’t rely on defeating terrorism would be “practically ineffective.”

That rejection was not only a snub to the United Nations but also to Assad’s other major ally, Russia. For almost two years, Moscow has tried to convene discussions between the regime and a nominal opposition based inside Syria. All they have achieved so far are two sets of talks. And even then they could not agree on an agenda for further negotiations. Now Assad is publicly rejecting Russia’s appeal for a third conference.

The president concluded his July speech with the rhetoric of defiance, pledging to make no compromises and to concede no land. But it was far too late to replace the mask.

Scott Lucas is a professor of international politics at the University of Birmingham in the U.K. This article was previously published on TheConversation.com