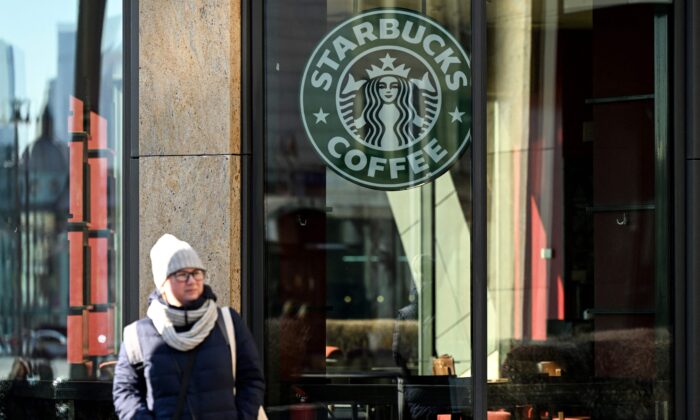 A view of a closed Starbucks coffee shop in Moscow, Russia on March 10, 2022. (AFP via Getty Images)
Business & Markets

Starbucks to Exit Russia Completely After 15 Years in Russian Market

Starbucks has announced it will completely exit Russia after earlier suspending its business activity in the country over the Ukraine invasion.

After 15 years on the Russian market, Starbucks will permanently shutter its 130 stores in Russia and no longer have a brand presence in the country, according to a May 23 memo to employees.

The coffee giant said it would keep paying its employees in Russia for six months and help them find work elsewhere.

Shortly after Russia’s invasion of Ukraine, Starbucks said that it would suspend its Russian operations.

“We continue to watch the tragic events unfold and, today, we have decided to suspend all business activity in Russia, including shipment of all Starbucks products,” wrote then-CEO Kevin Johnson in a March 8 memo.

“Our licensed partner has agreed to immediately pause store operations and will provide support to the nearly 2,000 partners in Russia who depend on Starbucks for their livelihood,” he said at the time.

Johnson also vowed to donate royalties from Starbucks’s business in Russia to humanitarian efforts in Ukraine.

Starbucks first entered the Russian market in 2007 and, with its exit, Starbucks joins other Western firms including McDonald’s in leaving Russia.

The world’s biggest burger chain announced last week that it would be permanently closing its 850 franchises in Russia, winding down over three decades of engagement with the Russian market.

“For the first time in our history, we are ‘de-Arching’ a major market and selling our portfolio of McDonald’s restaurants,” said McDonald’s executive Chris Kempczinski in a letter to employees and franchisees. “They will no longer carry the McDonald’s name or serve our menu. The Golden Arches will shine no more in Russia.”

McDonald’s said earlier it plans to sell its restaurants in Russia to one of its local licensees, who will rebrand them under a new name that has yet to be announced.

The burger giant said earlier that it expects a financial hit of between $1.2 billion and $1.4 billion over its exit from Russia.

A number of major corporations have left Russia over the invasion, from British energy giants Shell and BP to French carmaker Renault and German software giant SAP, with impacts to bottom lines.

Kempczinski said in his letter that nearly every multinational corporation is reconsidering its presence in Russia, calling it “a complicated issue that’s without precedent and with profound consequences.”

“It’s impossible to predict what the future may hold, but I choose to end my message with the same spirit that brought McDonald’s to Russia in the first place: hope,” Kempczinski wrote, concluding his missive with the phrase, “until we meet again.”