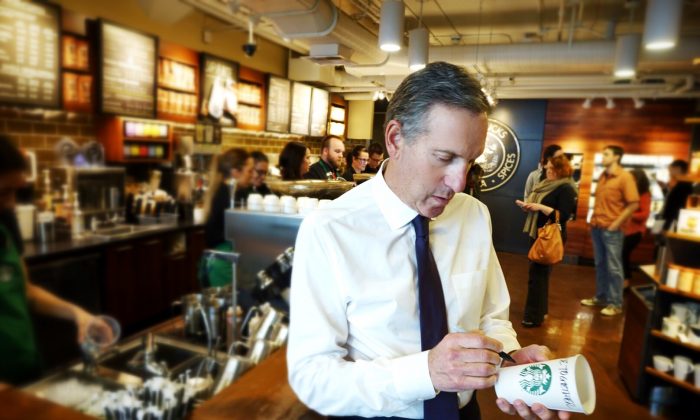 Starbucks CEO Howard Schultz, writes RaceTogether on a cup in a store in Seattle. (Starbucks Corporation)
US

Starbucks #RaceTogether Campaign: An Idea That Failed in Execution

Starbucks Coffee’s #RaceTogether campaign to get customers talking about race relations in America has hit a rough patch.

After a tirade of negative press and harsh criticism on social media this week, Starbucks CEO and chairman Harold Schultz defended the company’s efforts at its annual shareholders meeting on Wednesday, saying that the company will continue to roll out the year-long campaign with its partner, USA Today. This Friday, the newspaper will begin distributing leaflets with each copy, which include suggestions for conversation starters, such as “How have your racial views evolved from those of your parents?” and “What is America’s greatest race challenge?”

Schultz explained in a video about the campaign that the idea came from employees who spoke out during company forums that were held in the wake of protests in Ferguson, Mo., and New York City, after unarmed black men were killed at the hands of police.

The company appears genuine in their desire to get more people to acknowledge the realities of racial inequality in this country. But the overwhelming dissent toward the campaign indicates the public isn’t buying it. So what exactly went wrong?

Public relations experts point out that #RaceTogether is a prime example of a well-intentioned idea that was executed poorly. Instead of getting people to talk about race, Starbucks should have explicitly articulated actual goals and actions that reflect their commitment to the cause, said Melissa Arnoff, senior vice president of the public relations firm, Levick.

For example, Starbucks could pledge to hire more minorities, or collaborate with known organizations that work on race issues to hold local town hall forums.

“It [the campaign] has to be more defined than, we want to win hearts and minds with a conversation on race,” said Arnoff via a phone interview. A campaign should be transparent about what it wants to achieve, and have measurable impact—beyond writing a hashtag on customers’ coffee cups, Arnoff added.

Race and racism is a complex issue that is both personal and deeply rooted in America’s history. While Schultz has said he doesn’t expect the campaign to solve the problem of racism in America, Arnoff noted that by starting such an effort, the company is obligated in some ways to do something about it.  “No one expects a coffee company to know the answers. But if they do this campaign, they need to talk about how they’re going to help find the answers,” she said.

The campaign has to be more defined than, we want to win hearts and minds with a conversation on race.
— Melissa Arnoff

Starbucks has a history of championing positive social change, such as hiring more military veterans to help them transition to civilian life, encouraging employees to volunteer in their communities, and providing healthcare benefits to its part-time staff.

The race relations campaign is in line with that history, so Arnoff doesn’t see the backlash to #RaceTogether having much long-term effect on the company’s reputation.

Similarly, Stephen Hahn-Griffiths at the global consulting firm Reputation Institute believes Starbucks should have used the campaign as an opportunity to celebrate diversity and inclusiveness within the company, instead of a vehicle to discuss current events.

“That’s turning an unfortunate incident [deaths of unarmed black men] into a political statement. The minute you do that, you’re starting to polarize, rather than bring together,” said Hahn-Griffiths, who is vice president of U.S. strategy consulting at the Institute. Corporations are not the appropriate venues to talk about difficult social-political topics, he explained.

Rather than creating conversation, Starbucks could make efforts to foster a work environment that reflects a more diverse America. “It’s not just an HR [human resources] policy or a marketing campaign,” Hahn-Griffiths said. “It has to be part of doing business. It has to be an initiative, not just paying lip service.”

Even when USA Today and Starbucks stores begin distributing leaflets about their campaign, Hahn-Griffiths is skeptical it can do much to improve people’s perceptions of the campaign.

“When it comes to something like diversity, actions speak louder than words,” he said.