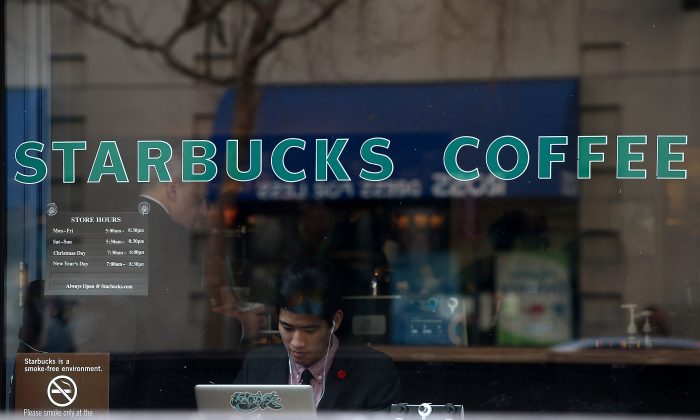 A Starbucks customer works on his laptop inside a Starbucks Coffee shop on January 22, 2015 in San Francisco, California.(Justin Sullivan/Getty Images)
Middle East

'Only send your driver to order'
By Jack Phillips
Print

A Starbucks in Riyadh, the capital of Saudi Arabia, apparently banned women from entering one of their coffee shop. The company has since responded, saying the situation was resolved.

In the Starbucks, it had a sign that read, “Please no entrance for ladies.” The sign was set up after a gender-barrier wall collapsed, which separated families and single people.

Unreal. Starbucks in Saudi Arabia refused to serve women. Note on their door, plus official response from company. pic.twitter.com/d4tCSqqQOv

What’s more, the sign asked for women to send in their drivers instead of going in, CNN reported.

The full sign read (sic), “PLEASE NO ENTRY FOR LADIES ONLY SEND YOUR DRIVER TO ORDER THANK YOU.”

It was noticed this week by social media users, who posted it on Twitter and elsewhere.

Saudi Women Vote for the First Time in Landmark Election

“#Starbucks store in Riyadh refused 2 serve me just because I’m a WOMAN & asked me 2 send a man instead,” one woman wrote.

#Starbucks store in Riyadh refused 2 serve me just because I’m a WOMAN & asked me 2 send a man instead@Starbucks pic.twitter.com/6Nj6DkOtFJ

Amid the backlash, the Seattle-based company said on Monday that the situation at the Riyadh coffee shop has been resolved.

The store, Starbucks told NBC News in a statement, “was originally built without a gender wall.” It added, “That meant it could only accommodate men in accordance with local law.”

Later, “a poster was placed at the store entrance as required by local law,” Starbucks added.

Starbucks spokeswoman Jaime Riley told the broadcaster: “Starbucks has now 78 stores in Saudi Arabia and all stores cater to both families and singles, except for one that is exclusively reserved for women and families.”

In Saudi Arabia, women are barred from driving without the approval of a male guardian, according to Human Rights Watch, an international human rights organization.

“Ministerial policies and practices forbid women from obtaining a passport, marrying, traveling, or accessing higher education without the approval of a male guardian, usually a husband, father, brother, or son,” HRW states on its website.

Last year, a top-level official issued a fatwa saying “that women are not allowed to visit a male doctor without their male guardians” and women “are not allowed to expose parts of the body with the exception of a medical emergency,” the organization states.