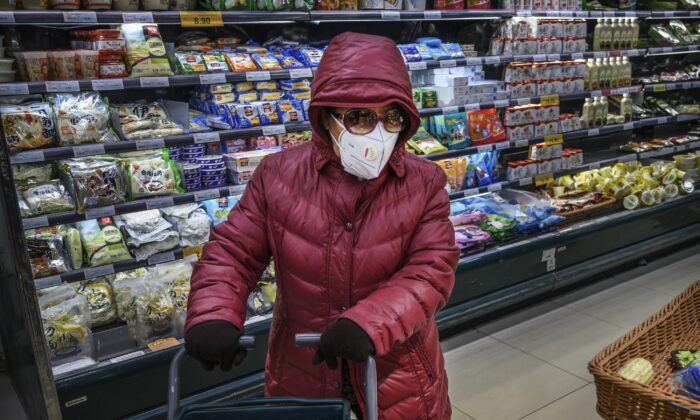 A Chinese woman wears a protective mask and sunglasses as she shops for groceries at a supermarket in Beijing, China on Jan. 28, 2020. (Kevin Frayer/Getty Images)
By Jack Phillips

Starbucks announced Wednesday it would close about 2,000 of its locations across China as the country struggles to contain a mysterious new virus.

Starbucks chief executive Kevin Johnson said the Seattle-based coffee chain was navigating a “dynamic situation” that necessitated the closure of about half of its 4,000 stores in China.

“Our immediate focus is on two key priorities in China,” Johnson told reporters in a conference call, reported NPR. “First, caring for the health and well-being of our partners and customers in our stores. Second: playing a constructive role in supporting local health officials and government leaders as they work to contain the coronavirus.”

Johnson, in a statement, added that Starbucks “will be transparent with all stakeholders in communicating how we are responding to these extraordinary circumstances and the implications for our near-term business results.”

“Masks are urgently being distributed so that very soon all crews across the country will be wearing them,” McDonald’s said in a statement sent to Business Insider. “Internal communications are enhanced for promoting more frequent hand washing and disinfection, as well as helping employees to have a greater general understanding of epidemic prevention.”

IKEA, the world’s largest furniture retailer, told Reuters it would temporarily close about 15 locations in China amid the outbreak.

The Sweden-based responded after Chinese officials called for the “efficient control of the spread of the disease,” prompting “IKEA China will from Jan. 29 temporarily close around half of the stores in China,” it said in a statement. “Affected employees will stay at home until further notice with pay,” IKEA said.

Outside of China, Thailand, Japan, South Korea, Taiwan, Vietnam, Singapore, Nepal, France, Australia, Malaysia, Canada, and the United States have all reported cases of the virus.

Several countries have evacuated, or are planning to evacuate, their diplomatic staff from Wuhan. The United States evacuated some 201 American citizens on a chartered plane, which landed in Alaska on Tuesday night before being diverted to California’s March Air Reserve.

Curt Hagman, the head of the San Bernardino County Board of Supervisors, said U.S. health officials told him about the plane’s diversion.

“Ontario International is one of the repatriation airports for the West Coast and we are always prepared to receive our citizens abroad in times of emergencies,” Hagman said in a video. “We were prepared but the state department decided to switch the flight to March Air Force Base for logistics that they have.”

So far, the Centers for Disease Control and Prevention (CDC) confirmed five U.S. cases of coronavirus: two in Southern California, one in Washington state, one in Illinois, and one in Arizona.

Japan also sent a chartered plane to Wuhan to evacuate its diplomatic staff, adding that about 650 Japanese nationals living around Wuhan have expressed a wish to return.

“The Chinese side informed us that they were ready to take one charter flight,” Motegi said Tuesday, Reuters reported. “Also, measures [for Japanese nationals] to get to [Wuhan] airport have been arranged.”