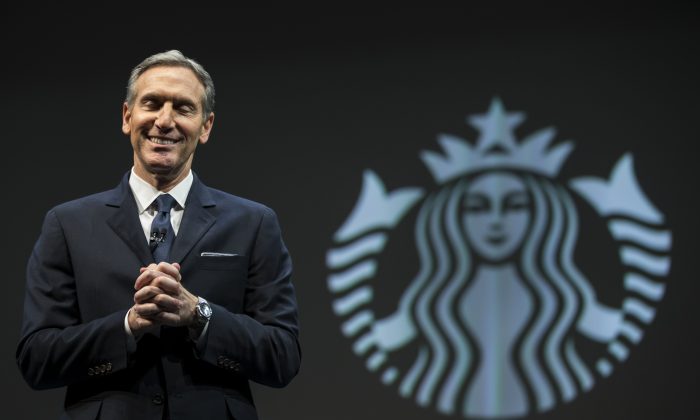 Starbucks Corp.. has decided to do away with share buybacks and plans to boost investment into operations, the company’s returning CEO Howard Schulz said in an open letter on April 4.

“Starting immediately, we are suspending our share repurchasing program. This decision will allow us to invest more profit into our people and our stores—the only way to create long-term value for all stakeholders,” Schultz said in the letter.

In October 2021, then-CEO Kevin Johnson had announced that Starbucks would spend $20 billion on buybacks and dividends over a three-year period.

However, the 2021 fiscal year ended with the company not repurchasing any shares as sales suffered due to the COVID-19 pandemic. Investors generally approve of share buybacks as it cuts down the number of outstanding shares, thereby raising the earnings per share.

Starbucks’ decision comes as Democrats, including President Joe Biden, have taken a stronger stance against share buybacks. In its recently published $5.8 trillion budget plan, the White House proposed new rules to limit stock buybacks, including making executives hold their company shares for several years and prohibiting them from selling the shares in the immediate years after a stock buyback.

“This would discourage corporations from using profits to repurchase stock and enrich executives, rather than investing in long-term growth and innovation,” the White House said.

The company is also facing a rising unionization drive among its American workforce, which is happening at a time when there is a nationwide labor shortage.

Starbucks has over 9,800 company-operated retail stores across North America, with thousands more that operate under licensing agreements. Employees at 10 stores have voted to join the SB Workers United union in the past several months, the union has said, with the most recent being the Starbucks Reserve Roastery at Chelsea Market in New York City, where employees voted 46–36 to unionize April 1.

Just days before on March 29, Starbucks employees at a store in Knoxville, Tennessee, voted 8–7 to establish a union, thus becoming the first of the company’s stores in the South to unionize.

Sen. Bernie Sanders (D-Vt.) sent a letter to Schultz on March 22 ahead of his return as Starbucks’ CEO, criticizing the company for “anti-union” efforts. He asked Schultz to “do the right thing” by ending the “union busting.”

“If Starbucks can afford to spend $20 billion on stock buybacks and dividends and provide a $20 million compensation package to its CEO, it can afford a unionized workforce that can collectively bargain for better wages, better benefits, safer working conditions, and reliable schedules,” Sanders wrote in the letter (pdf).

In Schulz’s open letter, the CEO indicated that he intends to work with employees and shareholders to design the “next Starbucks.” In the coming weeks, he said he plans to travel and connect with store employees as well as visit manufacturing plants around the world to get an idea of how to take the iconic brand into the next stage of its corporate evolution.

However, the company is facing “new realities in a changed world,” Schultz said.

Factors such as the COVID-19 pandemic, the supply chain crunch, political unrest, racial reckoning, and a “rising generation which seeks a new accountability for business” are the new challenges facing Starbucks, the CEO said.

This is Schultz’s third time at the helm as CEO of Starbucks. This time, he is taking over as the interim CEO and will step down when a permanent chief executive is chosen by fall 2022, the company said. Former CEO Kevin Johnson announced his retirement in March 2022.