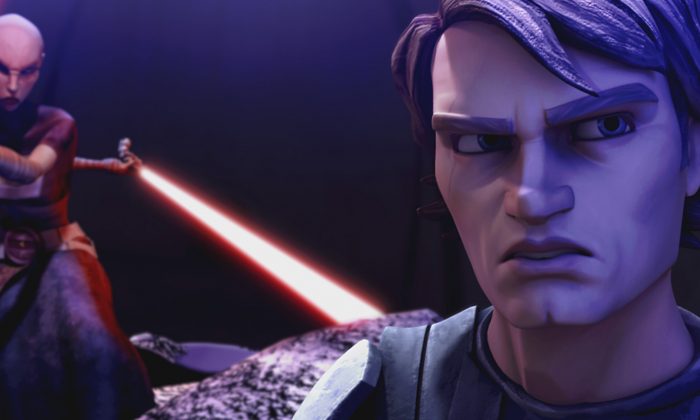 As The Clone Wars begins there are three noticeably absent things: no Fox fanfare (this is a Warner Bros release), no John Williams score and no opening crawl. Yes this is Star Wars, but not as you know it.

The seventh big screen Star Wars outing, TCW serves as an animated introduction to the toon tales set to unfold on a TV channel near you soon. Set between Episodes II and III (in one of the most mysterious and anticipated timeframes from the Star Wars universe), TCW is the story of how a galaxy-wide civil war causes the Republic to crumble, the Jedi Order to fall and an Empire to rise up from the ashes to seize control.

Brought to life through unique computer generation unlike anything else you’ve ever seen, TCW is a departure from both the larger live-action galaxy and the Genndy Tartakovsky-produced micro-series that previously explored the beginnings of the conflict. It might take die hards some time to get used to, but once the initial shock at the distinctive style passes there’s plenty to appreciate.

The look is Thunderbirds marionette people meets Japanese manga. It’s weird but it works. Characters move about in a slightly jerky, puppet on a string style, interacting with gorgeously rendered and textured backgrounds and environments. Combined, the whole thing has a strangely hyper-real quality to it; recognisable (especially in the stylised faces of our heroes and villains) but alien at the same time.

Returning to fight the good/evil fight are all the prequel series’ main players (voiced in the majority by sound-alikes): Obi-Wan, Anakin, Amidala, Yoda, Mace Windu, Chancellor Palpatine, Count Dooku, everyone’s favourite droids C-3PO and R2-D2 and the kiwi-sounding clone army. There are of course some new characters to meet and greet too (as many more are to follow in the TV show for sure). The most prominent of these is Anakin’s new Padawan apprentice, Ahsoka Tano.

An annoyingly chipper and brattish teen thrown into the fray ahead of schedule due to the ever-dwindling supply of Jedi, Ahsoka embodies the slightly skewed tone of TCW movie and perhaps the series to follow. Geared more towards the younger generation, there is a lightness and frivolity to the proceedings in comparison to the movies that may take some getting used to (as Ahsoka is also probably going to).

That’s not to say it’s all jokey fun and games, there is an intergalactic battle going on after all. So to balance out Ahsoka’s kiddish addition, we have the sinister, dual lightsaber swinging Asajj Ventress returning from the micro-series to aid the rise of the dark side. The most effective new villain in the Star Wars saga since Vader himself, the more we get of Ventress as the series goes on the better.

In truth a little overlong, The Clone Wars will undoubtedly work much better as 30-minute snippets on a week-by-week basis. But despite that, there’s no doubt that this serves as an effective introduction to the impending show and proves that no matter the format, the continuing Star Wars adventures are always welcome on the silver (or small) screen.