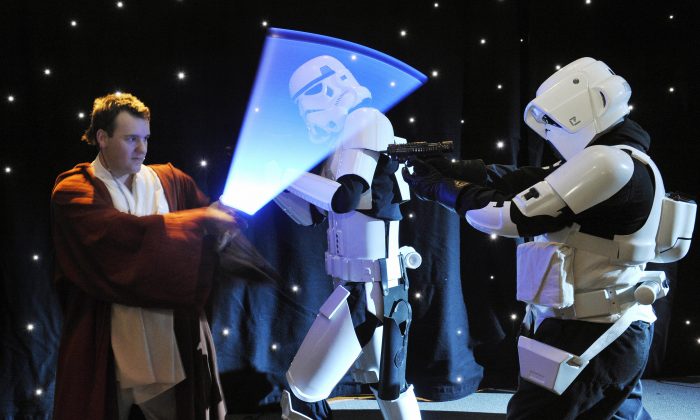 Fans dressed as Star Wars characters play at the launch of 'Star Wars: Where Science Meets Imagination' exhibition developed by the Boston Museum of Science, in collaboration with Lucasfilm Ltd, and now showing at Scienceworks in Melbourne on June 2, 2009. (William West/AFP/Getty Images)
Entertainment

Star Wars Episode 7: Some Dumb Cast and Movie Rumors From 2013

The Star Wars Episode 7, officially coming out in December 2015, has been surrounded by rumors about basically every aspect of the film, from cast, release date, and parts of the plot.

Check out some of the dumber ones below:

-Florence Welch in the cast in a leading role

Welch, a pop star, was rumored to have snagged a leading role in the film. She doesn’t have any acting experience.

The story sounds legitimate, except for Blunt is a singer and songwriter who has nothing to do with the movie or acting. Fisher is expected to actually return as the princess but it hasn’t been officially confirmed.

-Jennifer Lawrence in the cast as a young Han Solo

One article speculated that Lawrence should land this role.

-Zac Efron cast as someone

Efron, a singer and definitely not an A-list actor, was rumored to be included in the cast.

-The return of Darth Vader

Here’s a few things that have been confirmed

-J.J. Abrams is confirmed as the director

-Original stars Mark Hamill, Carrie Fisher, and Harrison Ford are in talks to be in the latest iteration