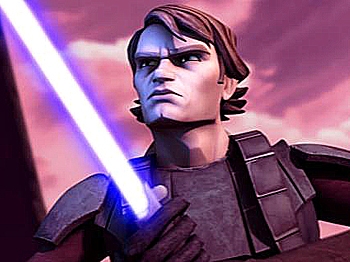 The Star Wars universe is back on the big screen and for the first time ever, it’s animated. Star Wars: The Clone Wars is the first full-length animated movie that brings the imagination of George Lucas’s creations to life.

Directed by David Filoni, a veteran of animated productions such as the Nickelodeon series Avatar: The Last Airbender, The Clone Wars, takes place between Episodes II and III.

Jedi and Clone Troopers fight to take back planets that were seized by Count Dooku and his Separatist faction.  In the midst of all of this, Jabba the Hutt’s son is kidnapped.  Now Anakin Skywalker, along with his mentor Obi-Wan Kenobi, and his new padawan learner Ahsoka Tano must recover Jabba’s son and try to keep the peace between the Republic and the Hutts—though the Jedis will discover an even more insidious plot when all is said and done.

Visually, the movie is stunning. Filoni and Lucas were going for a distinct visual style that would evoke the spirit of the films while at the same time bring a unique, distinctive look to the first animated Star Wars feature.  The characters have an anime quality, but there is also a strong sense of Gerry Anderson’s Thunderbirds as the characters also have a marionette feel to them.

The action sequences, the camera angles, and the settings are straight out of any Star Wars movie, and the pacing is up-tempo. While not scored by regular composer John Williams, the film still retains that Star Wars feel with Kevin Kiner contributing the music. Kiner doesn’t stray too far from the mold of legend Williams, while adding his own touches such as some rock instrumentation in an action sequence that works in an animated Star Wars, but does slightly lesson the tension and formality that the non-animated series is known for.

What I enjoyed most was watching Anakin as he learns to grow into an experienced teacher to the younger, more impatient padawan Ahsoka Tano. The teacher-pupil relationship is a recurring theme throughout the series such as Obi-Wan and Qui-Gon, Anakin and Obi-Wan, Luke and Obi-Wan, and finally comes full circle with Luke and Master Jedi Yoda in Empire  and Jedi.

A wiser, more patient Anakin is interesting as opposed to the reckless abandon that we see in Episode II. The interplay between Anakin and Obi-Wan is ultimately sad knowing that Anakin will eventually turn to the dark-side and become the Sith Darth Vadar!

If there’s any criticism for Clones, it may be that loyal fans have already been exposed to The Clone Wars before—whether it's been in the Genndy Tartakovsky's micro-toons on Cartoon Network, the various novels, video games, and comic books—it's all been done before.

While this effort takes a refreshing look at this exciting time in the Star Wars timeline, it's been established that the Star Wars Universe has a deep and vast history. It would be interesting to see some of those other timelines, like maybe a story from the "Old Republic" days or during the days of Darth Bane's reign as Sith Lord.  While Clones the movie takes the subject and gives it a fresh and exciting look, I would be very happy to see something new from the Star Wars universe.

Ultimately Clones will appeal to the kiddies and the brand loyalists, though its appeal is narrower than its non-animated films in the franchise.