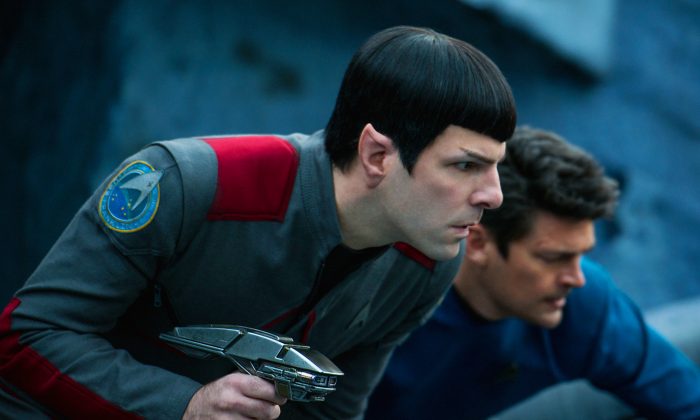 ‘Star Trek Beyond’ Soars With $59.6M at Weekend Box Office

LOS ANGELES—”Star Trek Beyond” has landed atop the weekend box office.

Paramount’s latest outing with the Starship Enterprise soared to $59.6 million in North American ticket sales, knocking Universal’s “The Secret Life of Pets” from the No. 1 spot, according to studio estimates Sunday.

“Pets” was the second-most-popular film at theaters, adding an additional $29.3 million to its stellar $260 million earnings to date.

“Star Trek Beyond” is the third film since J.J. Abrams rebooted the franchise in 2009. Despite the latest release opening $20 million behind 2009’s “Star Trek,” experts say it’s still promising for Paramount.

He doesn’t think the film was hurt by the unexpected loss of one of its stars. Actor Anton Yelchin, who played Chekov, was killed in a freak car accident last month.

“The tragic passing of Anton Yelchin made it bittersweet for fans,” Dergarabedian said.

“The Secret Life of Pets” and “Ghostbusters” bested the weekend’s other new releases.

Fox Searchlight’s “Absolutely Fabulous: The Movie” opened outside the top 10 with $1.8 million.

Estimated ticket sales for Friday through Sunday at U.S. and Canadian theaters, according to comScore. Final three-day domestic figures will be released Monday.

9. “Hillary’s America: The Secret History of the Democratic Party,” $3.7 million.