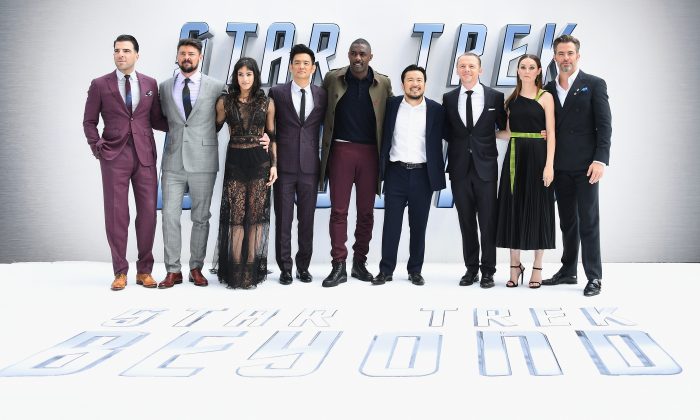 LOS ANGELES—The creators of the latest Star Trek film “Star Trek Beyond” said at a press junket on Thursday that they were inspired by the powers of family and diversity during the production of the film.

Director Justin Lin, who immigrated to the United States at the age of eight, said he used to watch Star Trek on television in the evening together with his parents and brother. It became a decade-long bonding experience that taught him a deeper meaning of the word “family.”

“Watching Star Trek, it kind of instilled in me that family is not just my blood. It’s through shared experience,” said Lin.

Lin became director of “Star Trek Beyond” after J.J. Abrams, the director of the first two films, switched to the role of executive producer.

Abrams and actors from the film said they have become a family to each other after their third movie, a relationship that was addressed and challenged within the film itself, in which the crew of the USS Enterprise are split apart on a foreign planet and their lives threatened.

As a result, the individual dynamics between certain characters are explored further in “Star Trek Beyond” than in the other two films, said the filmmakers.

“I love the relationships in Star Trek,” said co-writer and actor Simon Pegg. “It was nice to pursue those a little bit more.”

For example, Pegg said two polar opposite characters, Dr. Leonard “Bones” McCoy and Commander Spock, spend a lot of time together in the new film, with hilarious yet touching results.

The group said the original creator of the Star Trek series, Gene Roddenberry, made a television show that was incredibly diverse for its time. For “Star Trek Beyond” they tried to give even more roles to women and people of color.

John Cho, who plays the character Hikaru Sulu, said experiencing Star Trek and seeing depictions of a wide variety of strange-looking aliens reminds him of how everyone on Earth is actually fairly similar.

“It does become comically apparent when you look around the planet earth that we live on that we do have so much more in common than we don’t,” said Cho. “The little things that seem to divide us here in our present time seem more exaggeratedly small after seeing an episode of Star Trek.”

“Star Trek Beyond” is the third film in a recent reboot of the franchise that explores what happened to the characters in a time period before that of the original television series that started in 1966. That series has since inspired four spin-off television series and multiple other films.

Leonard Nimoy, who played Mr. Spock in the original series, died at the age of 83 in February of 2015. Anton Yelchin, who played the character Pavel Chekov in the two most recent films, was killed in June at the age of 27 after being pinned to a wall by his car.

“The pain of his loss is still very raw,” said Karl Urban, who plays the character McCoy, of Yelchin. “This film will probably be the most special experience for all of us. It represents the golden period where our family was fully together for the last time.”

However, Abrams said everyone’s positive experience and memories during the making of “Star Trek Beyond” has already started them thinking about a fourth film.

“It’s something that hopefully we’re figurative minutes away from talking about,” said J.J. Abrams. “The answer is 100 percent yes, and it’s incredibly exciting.”

“Star Trek Beyond” opens in theaters on July 22.