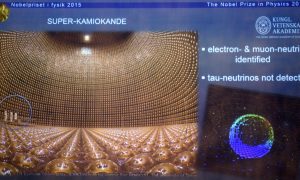 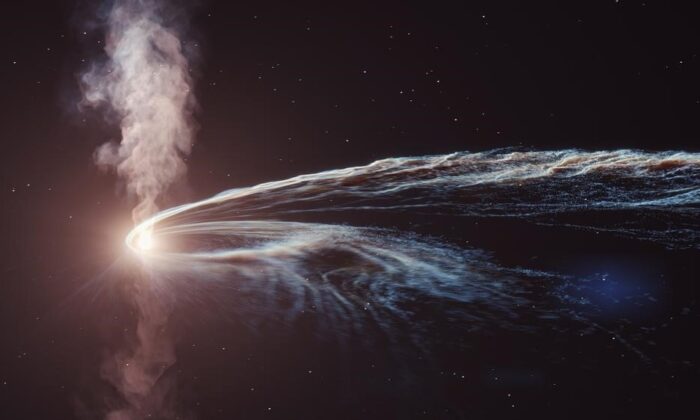 An illustration of a tidal disruption event, in which a star is shredded and swallowed by a supermassive black hole, which launches a tremendous amount of energy in a plasma jet-like outflow. (DESY, Science Communication Lab)
Space

A high-energy particle, thought to have been sent our way by a supermassive black hole hundreds of millions of years ago, has collided with Earth and offered astronomers a rare insight into black holes.

Supermassive black holes are behemoths hiding in the centers of galaxies. Their gravitational force is so strong that if an unlucky star gets too close to it, the star will be shredded into pieces.

Astronomers call this a tidal disruption event. The black hole then swallows the remains of the star, temporarily giving off light, as the black hole is full of energy.

Recently, a team of astronomers witnessed such a cosmic catastrophe.

What made this event more significant was that astronomers later found a “ghost particle,” or neutrino, that came from the same direction.

On Oct. 1, 2019, the IceCube Neutrino Observatory in Antarctica detected a very high-energy neutrino called IC191001A. It turned out that the neutrino had come from a direction very close to that of AT2019dsg.

“IC191001A smashed into the Antarctic ice with a remarkable energy of more than 100 teraelectronvolts,” said co-author Professor Anna Franckowiak, a researcher at the University of Bochum, in a statement.

“For comparison, that’s at least ten times the maximum particle energy that can be achieved in the world’s most powerful particle accelerator, the Large Hadron Collider at the European particle physics lab CERN near Geneva.”

Neutrinos are everywhere and easily outnumber all the atoms in the universe, but they are very small and hardly interact with anything, making them extremely hard to detect. They are called ghost particles because they can pass unnoticed through solid objects.

“This is the first neutrino linked to a tidal disruption event, and it brings us valuable evidence,” said co-lead author Robert Stein, a Ph.D. student at the German Electron-Synchrotron (DESY) and Humboldt University.

“The origin of cosmic high-energy neutrinos is unknown, primarily because they are notoriously hard to pin down,” said co-lead author Dr. Sjoert van Velzen, a researcher at New York University, in a statement. “Our result would be only the second time high-energy neutrinos have been traced back to their source.”

“Tidal disruption events are incredibly rare phenomena, only occurring once every 10,000 to 100,000 years in a large galaxy like our own. Astronomers have only observed a few dozen at this point,” said Swift Principal Investigator S. Bradley Cenko at NASA’s Goddard Space Flight Center in Greenbelt, Maryland, in a statement. “Multiwavelength measurements of each event help us learn more about them as a class, so AT2019dsg was of great interest even without an initial neutrino detection.”

Since the neutrino detection came months after the tidal disruption event, it raised questions about whether the two detections were really related.

These doubts prompted a multi-wavelength campaign using a variety of instruments such as radio, optical, and X-ray telescopes, including NASA’s Swift X-ray space telescope, to try to understand the connection between the tidal disruption event and the very high-energy neutrino.

The observations indicated that the tidal disruption event was a natural particle accelerator.

“The combined observations demonstrate the power of multi-messenger astronomy,” said co-author Marek Kowalski, head of neutrino astronomy at DESY and a professor at Humboldt University in Berlin. “Without the detection of the tidal disruption event, the neutrino would be just one of many. And without the neutrino, the observation of the tidal disruption event would be just one of many. Only through the combination could we find the accelerator and learn something new about the processes inside.”

AT2019dsg is one of only a handful of known X-ray-emitting tidal disruption events. Scientists believe that the X-rays come from either the inner part of the accretion disk or from relativistic plasma jets.

The research team did not see clear evidence of jets from AT2019dsg, and instead suggested that rapid cooling in the disk could explain the X-ray emission.

However, not everyone agrees with this idea. Another argument is that the emission came from a jet that was quickly obscured by a debris cloud. So far, it is unclear which scenario is correct.

A video from NASA’s Goddard Space Flight Center shows what the tidal disruption event might have looked like.

“We might only be seeing the tip of the iceberg here,” said Professor Francis Halzen, a researcher at the University of Wisconsin-Madison and principal investigator of IceCube, who was not directly involved in the study. “In the future, we expect to find many more associations between high-energy neutrinos and their sources.”

The discovery has been published in two papers in the journal Nature Astronomy.