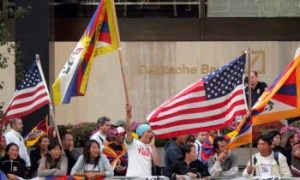 Congressman Tells U.N. to Get Out
0

By Ginger Chan
Print
Astrophysicists are now better equipped to determine the age of certain stars, according to an article published online March 30 in the journal Nature.

Using data gathered continuously over a year by NASA’s Kepler space telescope, scientists analyzed brightness measurements from red giants, stars that have burned off the hydrogen in their cores and are instead burning surface hydrogen or have begun burning the helium in their cores.

Despite these differences in core reactions between younger and older red giants, the surfaces look the same, which has impeded research in studying these celestial bodies.

By studying the fluctuations in the brightness of the stars, however, the team has discovered clues reflecting the internal states of red giants.

“The changes in brightness at a star’s surface is a result of turbulent motions inside that cause continuous star-quakes, creating sound waves that travel down through the interior and back to the surface,” said Tim Bedding, lead author of the paper and professor at the School of Physics at the University of Sydney, in a press release.

“Under the right conditions, these waves interact with other waves trapped inside the star’s helium core. It is these ‘mixed’ oscillation modes that are the key to understanding a star’s particular life stage. By carefully measuring very subtle features of the oscillations in a star’s brightness, we can see that some stars have run out of hydrogen in the center and are now burning helium, and are therefore at a later stage of life.”

The work is an example from the emerging field of asteroseismology, which utilizes theories similar to those for studying earthquakes. “In the same way that geologists use earthquakes to explore Earth’s interior, we use star quakes to explore the internal structure of stars,” Bedding noted.

The findings support previous models of stellar seismic activity. “We had some idea from theoretical models that these subtle oscillation patterns would be there, but this confirms our models,” Bedding said. “It allows us to tell red giants apart, and we will be able to compare the fraction of stars that are at the different stages of evolution in a way that we couldn’t before.”