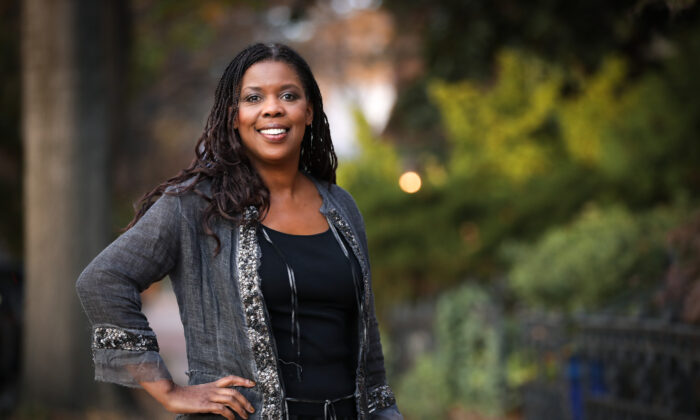 “We, as a country, can’t go on like this anymore. We are going to be free or we’re not. And that’s the discussion that’s being had,” says Star Parker, a conservative commentator and founder of the Center for Urban Renewal and Education (CURE).

“There are people that have a vested interest in us not being free. And that’s the noise you hear,” Parker said in an interview with Epoch Times senior editor Jan Jekielek for the “American Thought Leaders” program. Her newest book is titled “Necessary Noise: How Donald Trump Inflames the Culture War and Why This Is Good News for America.”

The United States has arrived at a critical juncture, and Americans must decide “whether we’re going to be biblical and free” or “secular and statist,” Parker said.

Trump’s election opened the door for dialogue about America’s deep-seated problems. The political debates raging across America today may be jarring and cacophonous, but they are healthy and necessary, Parker said.

“These are discussions we’ve had to have for a long time.”

“When we think about the founding principles of the country, we’re talking about eternal truths,” Parker said. “The founders were very clear that you cannot self-govern without some type of moral framework.”

“Most countries have some type of religious affiliation driving their public square. America’s was the Judeo-Christian heritage. It’s where we got most of our law,” Parker said.

What makes the United States exceptional is the concept of “E Pluribus Unum,” meaning “out of many, one.” In the United States, diverse groups united behind a common set of values surrounding self-government.

But now, multiculturalism, Parker says, increasingly tells people they don’t have to share any core American values or assimilate in any way. Multiculturalism has “morphed now into Marxism where the totalitarian state is replacing religion, our Judeo-Christian heritage where people learn to self-govern.

“People are now able to make whatever choices that they want to, and the government has become the Band-Aid.”

She says the War on Poverty incentivized single motherhood because it dramatically reduced benefits to women when they married, even if it was to someone with a very low income.

In the black community, “when they started this War on Poverty, we were looking at out-of-marriage birth rates at about 22 percent. Well, today, in black America, they’re 72 percent,” Parker said.

And what a lot of people didn’t notice was the similar social breakdown of middle America, Parker said. Within the white middle class, out-of-marriage birth rates also have experienced a 10-fold increase to 30 percent today from 3 percent in the 1960s, Parker said.

“So we started to see the same pathologies of dependency and low-educational aspiration and crime and more promiscuity.”

The 63 million people who voted for Trump believed deeply that the United States was in trouble, yet heard no one before—politician or not—say so and make deliberate decisions to counteract this decline, she said.

“I call them just the decent people in quiet America that go to church on Sunday morning, take their kids to school on Monday morning, and go to work. And on Saturday, they looked at their country one day and said, ‘What happened?’”

“We’re a new society, because of secularism. We can’t even decide what a family looks like,” Parker said. As society moves away from the traditional family—namely the father married to the mother of the children—“you end up with other challenges in your society: suicide, depression, poverty that you can’t control or break out of.”

She thinks that many societal problems are closely tied to abortion.

“We have a big crime against humanity on the table. We’ve had it since Roe v. Wade,” she said. “Lawless living” is the result of “saying that you do not have to organize your sexual impulses within marriage.”

“We’re becoming very chaotic. And I think that that’s why this door has opened for a totalitarian state. That’s why you’re actually hearing people say we should be socialist.”

Parker was on welfare for several years as a young adult.

“I lived the lie of the left, so I already knew what was in store for the rest of us,” Parker said.

As a teenager, “I had already heard all of the lies that we’re hearing in our society today.”

In Parker’s 1998 autobiography—“Pimps, Whores, and Welfare Brats”—she details how she turned a life of drugs, crime, and welfare dependency around to become a successful entrepreneur and conservative activist.

“I spent my adolescence blaming most of my troubles on white people,” Parker wrote. When she was young, Parker vandalized school buildings and storefronts, joined a gang, burglarized homes, blew up two teachers’ cars, and had four abortions before she ultimately decided to keep the child from her fifth pregnancy.

“I was very wrapped up in just reckless living because when you don’t think that there’s a future for you, you just live for the day.”

After she gave birth to her daughter, she got a part-time job that paid her under the table so she could continue to collect food stamps and $465 in welfare every month. She made extra money by selling her Medi-Cal treatment stickers to other people.

“What happened for me was someone confronted me with truth and told me my lifestyle was unacceptable to God,” Parker said.

“I started reading the Bible and found out that actually I should want more, I should do more, I should be more.” So she went back to college, got off welfare, and started her own business.

Later, she became involved in public policy and federal welfare reform in Washington, to combat what she saw as the failures of U.S. anti-poverty programs.

“We spend $900 billion a year on anti-poverty programs. It is a quarter of our budget. We have spent $24 trillion since the War on Poverty started,” Parker said.

Now, more and more people are dependent on the government and this, in turn, has mired the federal government in debt. “We spend over $1 trillion a year that we don’t have,” Parker said.

Government shouldn’t be engaging in large-scale charity and anti-poverty programs, in Parker’s view. “Give the people their money back and let them decide which service provider they want to be benevolent to,” Parker said.

The issues of poverty and homelessness are close to home for Parker; her older brother has been homeless for more than two decades.

“The problem is not housing,” Parker said. Those who are homeless generally fall in five categories—drug addiction, alcohol addiction, economic distress, disability, or a mental challenge, she said.

Instead of building more low-income housing, she says, people trying to help should tackle the root of the problem that caused that individual to become homeless in the first place.

“Homelessness is a really classic case to see where government fails, because if you go to a homeless shelter that the government controls, it looks like our prison system. The guys are all hanging outside, and there’s no requirement for them to do anything to better their lives.”

Nonprofit homeless shelters, on the other hand, especially Christian ones, “really think that there’s potential in that person. So they work with them to fix what’s broken down, to get them back to health,” Parker argued.

Parker’s view is that giving money to homeless people can actually make the situation worse.

“Americans actually think they’re helping people by chipping them a nickel and a quarter: ‘Just go away, leave me alone. I’m going to give you a little dollar or even take a little food basket.’ They’re really just postponing the inevitable. And after a while, that person gets used to living on the street,” Parker said.

“Next thing you know, you don’t have anything healthy enough in you to pull yourself back together.”

“And so, 25 years later, yeah, my brother’s just a zombie living on the street,” Parker said.

Parker suggests that the broken windows theory, first introduced by James Q. Wilson and George Kelling, provides a much better way of dealing with homelessness and generational poverty than building more low-income housing.

The best thing to do is to keep people moving with no-loitering laws, Parker said.

Trump has transformed impoverished areas of the United States with new initiatives, such as creating opportunity zones in his Tax Cuts and Jobs Act in 2017, Parker says. Through special tax breaks, the opportunity zone program incentivizes Americans to invest in economically distressed communities.

Now, money is starting to flow into these poor zip codes in both inner cities and rural areas, and is creating job opportunities, Parker said.

Once the local government has some income from taxes, then it can ensure basic infrastructure in the neighborhood, Parker said.

Over the past few decades, Washington has devolved into a wealthy bureaucracy and a “playground for politicians, for legislators, for lawyers, for lobbyists,” Parker said.

“And they don’t want outsiders changing the way that things are.”

The founders envisioned a limited role of government, but what the United States has now is exactly the opposite. “We’re looking at 60 percent of Americans getting more from government than they put in,” Parker said.

The current impeachment inquiry, in Parker’s view, is just an illegitimate attempt to oust a duly elected president.

“They just want to get rid of this president because he’s not finished. Can you imagine four more years?”

“The list is long for areas where he has been very, very disruptive to the status quo. And all of them are very upset with him,” Parker said.

“I think that we are at that critical cross point, similar to the 1850s, when Abraham Lincoln opened the Scripture and said, we just can’t do this anymore.”

Parker believes that people across the nation—like her young former self—have turned away from America’s founding principles, absolved themselves of personal responsibility, and expect the government to solve their problems.

Following Trump’s election, the United States was thrust into heated debate; it’s a critical juncture, a moment of decision about the nation’s future, Parker said.

“Let’s hope that we still battle in the voting booth.”