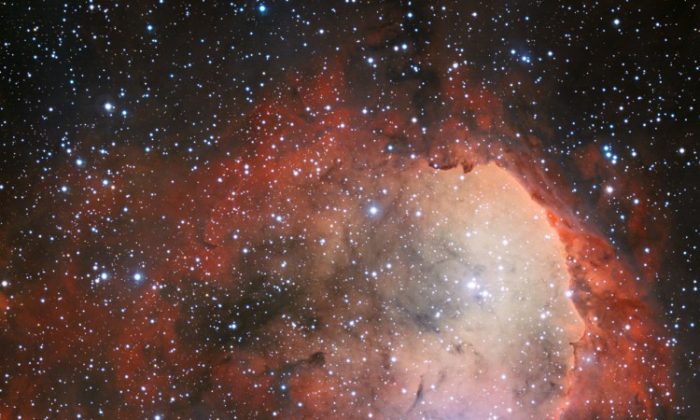 The intense radiation from several of NGC 3324's massive, blue-white stars has carved out a cavity in the surrounding gas and dust. The ultraviolet radiation from these young hot stars also cause the gas cloud to glow in rich colors. (European Southern Observatory)
Science

This image of the star cluster NGC 3324, located about 7,500 light-years away in the southern constellation of Carina, was captured by the MPG/ESO 2.2-meter telescope in the Andes in Chile.

A number of hot young stars born several million years ago are emitting ultraviolet light that makes the cloud of gas and dust glow in crimson and greenish-yellow tones. Combined with stellar winds, this radiation has sculpted out a cavity in the nebula with its wall visible to the right.

The wall’s outline looks rather like the profile of a human face, hence the nebula was nicknamed after the Chilean poet, Gabriela Mistral, who was first the Latin American to win the Nobel Prize in Literature, and grew up in the Andes.

Various shadowy features in the cloud are caused by dust grains obscuring the gaseous glow, adding another layer of complexity to the view.