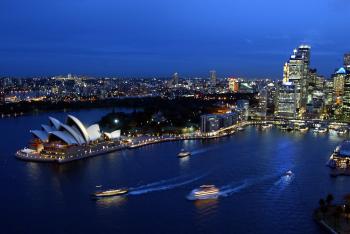 Tabcorp hopes the AU$860 million (US$790 million) revamp will attract Hollywood celebrities, business moguls, and important conventions to the city.

Managing Director Sid Vaikunta said, “Sydney deserves a tremendous casino. Every seat will have a view of the Harbour.”

Las Vegas designers are busy recreating the complex to include a waterfront hotel, event arena, convention centre, and as many as 20 new bars, restaurants and cafes. The centre is predicted to generate 1,000 jobs.

The new deluxe hotel is being dubbed as “a lantern on Sydney Harbour” with plans for VIP gaming rooms and a world-class spa. This will be Sydney central business district's first hotel development since it hosted the Olympic Games in 2000.

Business directors hope the entertainment venue will salvage the AU$300 million (US$275 million) in business currently being scooped by Melbourne each year. Tourism and Transport Forum managing director Christopher Brown said Sydney has been missing out on “highest yield tourists” due to a lack of conference and convention capacity.