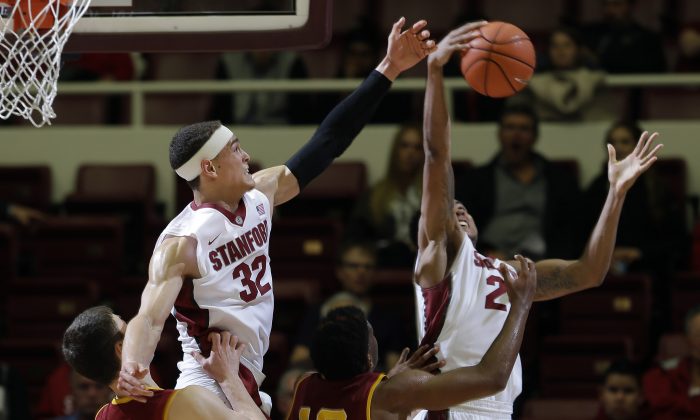 Stanford forwards Dwight Powell, top left, and Josh Huestis will be looking to get their only career win against the Arizona Wildcats on March 2, 2014. (AP Photo/Marcio Jose Sanchez)
College Sports

The Pac-12 rivals will play at the McKale Center in Tuscon, Arizona.

The game will be broadcast on ESPN U.

The Wildcats are one win away from going unbeaten at home. They’re currently ranked third in the country, the only ranked team in their conference.

It would be foolish for us to talk about that with our team,” coach Sean Miller told ESPN. “It’s just about being ready for Stanford. And if we’re able to do that, I think it would be an accomplishment that we would be very proud of.”

Miller sees a big challenge in Stanford, which needs a high-profile victory to boost its chances of getting into the NCAA tournament. The team only lost by three points to the Wildcats on January 29.

“For 38 minutes, I thought we were right there,” said Cardinal coach Johnny Dawkins about the loss. “Credit Arizona for making the plays they had to make at the end.”

Another big motivation is that senior starting forwards Josh Huestis and Dwight Powell have never beaten Arizona, losing five times over their careers. It’s the only conference team they haven’t beaten.