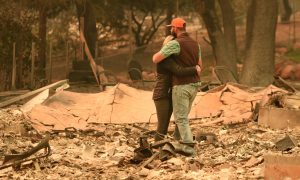 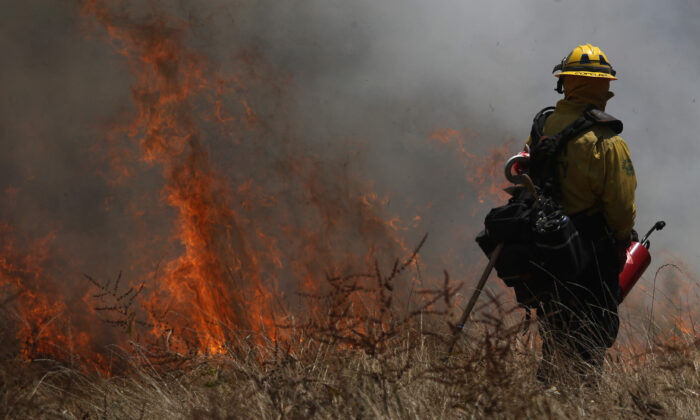 California scientists have developed a weather-resistant gel that lasts for months and can be sprayed on vegetation to prevent deadly and destructive wildfires.

Unlike traditional fire retardants, the gel-like fluid is water and wind resistant, so it can be sprayed on grasses and other vegetation and remain effective for months at a time—long enough to last an entire wildfire season in California. It’s also non-toxic and biodegradable.

The gel was invented in a lab at Stanford University by assistant professor of materials science and engineering Eric Appel and a team of students following about three years of research and development. The substance contains the same safe, active ingredient found in the red-colored fire retardant that most Californians have seen cascading down from aircraft during fire season.

The groundbreaking discovery, published in the Proceedings of the National Academy of Sciences, could change how California—and maybe the world—approaches fire prevention.

“It gives people an opportunity for the first time to work on proactive fire prevention,” Appel told The Epoch Times.

Still, Appel wants to be clear about what the new gel can and can’t do.

“There’s a common misconception that we’ve created a magic retardant that can stop catastrophic fires as they’re burning, and that’s not true,” he said. “That’s just impossible.”

Raging wildfires spew burning embers high into the air. Carried in the wind, embers can travel up to a mile away. When they land, these red-hot firebrands can easily ignite other blazes, making fires extremely difficult to contain.

“They’re throwing embers a mile down the road, and every new ember can start a new fire,” Appel said. “So, the whole point of our work was to create a new tool to stop the fires from starting in the first place.”

Traditional fire retardants, such as inorganic salt ammonium polyphosphate (APP), stick to the surface of plants and bind to carbon, creating a layer that is fire resistant, according to the study.

When APP burns, it produces water which helps to extinguish the fire. But because APP itself doesn’t adhere well to vegetation in damp or windy conditions, it’s only useful for fighting fires in specific conditions and does not play a role in preventing them.

It’s not that APP doesn’t work; it’s that it doesn’t stick to the vegetation long enough, Appel said.

The Stanford scientists mixed APP with the new gel and discovered that the combined substance formed a fireproof prophylactic coating that sticks to plants much longer. About 50 percent more of the APP stuck to the vegetation when it was mixed with the new gel. Further tests showed that grass treated with the gel would not ignite, even after a rainstorm.

“So, we came up with a new class of performance additives that get more of the retardant onto the vegetation and keep it there for the duration of the peak [wildfire] season,” he said.

The additives consist of cellulose polymers that are derived from plants and used as viscosity modifiers (agents that determine how thick fluids are) in food, cosmetics, and pharmaceutical drugs, as well as colloidal silica, which is chemically identical to sand or silicon dioxide.

The new gel is safe to use and biodegrades without consuming oxygen, Appel said.

“We tested them with an environmental toxicologist here at Stanford and all of the components are already used in food and beverage manufacturing,” Appel said.

“We specifically investigated the toxicity to both mammalian cells and to bacteria of different sorts, so we were specifically evaluating the new performance enhancers that we were utilizing and we showed that they biodegrade slowly anaerobically. They don’t degrade aerobically but they also don’t inhibit aerobic degradation so that is actually something that we wanted from an environmental perspective.”

A rainstorm in Northern California about a month ago, just before the first major red flag warnings would have been enough to wash away traditional non-proactive fire retardants, which cannot withstand precipitation, heavy dew, fog, or even high winds.

“That’s why we designed the material to persist through all that kind of weathering and environmental exposure. Only when there is a major rainfall of two or three inches when the season is over—and nobody is worried about fires anymore—would the materials wash off into the soils and then biodegrade,” Appel said. “It stays on until we have a big rain.”

“They are actually using it to pre-treat roadsides in a couple of high-risk areas in Southern California, in areas that are notorious for having many ignitions every year,” Appel said. And, so far, no fires have started in any of the areas that have been treated.

According to the study, about 84 per cent of the 300,624 wildfires in California over the last decade occurred in high-risk areas. About 75 percent were started on roadsides, and nine percent at the sites of power utility structures.

“The point is that if you can put a protective barrier over these areas, then you could stop the fires at their source,” Appel said. “We’re not talking about just drawing fire lines to combat an actively burning fire. What we’re trying to do is stop them before they start.”

The gel, recently branded as a product called Fortify, shows promise of commercial success with more than 50,000 gallons already sold.

The best way to apply the product is by using agricultural equipment to spray it on vegetation near high-risk areas. It could also be sprayed from planes or dropped from helicopter buckets, though that has not yet been tried, Appel said.

The field tests also found that cutting grass in high risk areas does little, if anything, to slow the spread of wildfires.

“We showed in the paper that mowed grass burns just as fast as unmowed grass, so even if you mow grass along the roadsides, it’s not preventing fires from starting,” Appel said.

Removing all the vegetation from roadsides doesn’t work either because it destabilizes the soil, triggering mudslides. Using the new gel, is the best of both worlds, because the vegetation stays in place.

“Just treating standing grass was completely effective in preventing ignitions whereas mowing or whatever else obviously wasn’t at all,” Appel said.

The idea to create the gel sprang from a casual conversation Appel had had with his brother-in-law, Jesse Acosta, who had worked as a fire prevention forester for the state of Hawaii, and is now at Cal Poly San Luis Obispo. The two were talking about how wildfires often occur in the same problem areas, and they began to toss back and forth “what if” scenarios about how to prevent them.

The challenge stuck with him, setting the gears of his mind in motion. The more he thought about it, the more he began to connect the dots between the wildfire puzzle and his work at Stanford.

“My research lab is mostly focused on biomedical problems, and so we are—I guess you could call us—a drug delivery lab. We don’t make the active drug molecules. We don’t engineer new proteins or make new molecules, but we engineer materials that get those molecules where they need to be when they need to be there,” Appel said.

“One of our biggest research areas in in sustained or prolonged delivery so what we’re doing is developing technology that allows you to have a single injection once every six months instead of needing to take a pill or an injection every day. So, it encapsulates the drug and very slowly delivers it over a very long period of time.”

“You can see the connection. A lot of the engineering design criteria for this fire-retardant system is very similar to what is needed to keep a drug in the body for a long period of time, because you need to encapsulate the active ingredient and make sure the active ingredient still does what it is supposed to do but keep it where it needs to be,” Appel said.

Soon after, Appel set to work with grad students and postdocs in his lab to develop the new gel.

Anthony Yu, a fifth-year materials scientist grad student, and Hector Lopez Hernandez, a mechanical engineering postdoc, led most of the research and development.

“Those two together really figured out why these materials work together the way that they do and all of the nitty-gritty nerdy science stuff that’s in the actual publication,” said Appel, the study’s senior author.

“We don’t have a tool that’s comparable to this,” said Alan Peters, a CalFire division chief in San Luis Obispo who monitored some of the tests, in a statement. “It has the potential to definitely reduce the number of fires.”