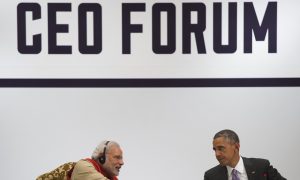 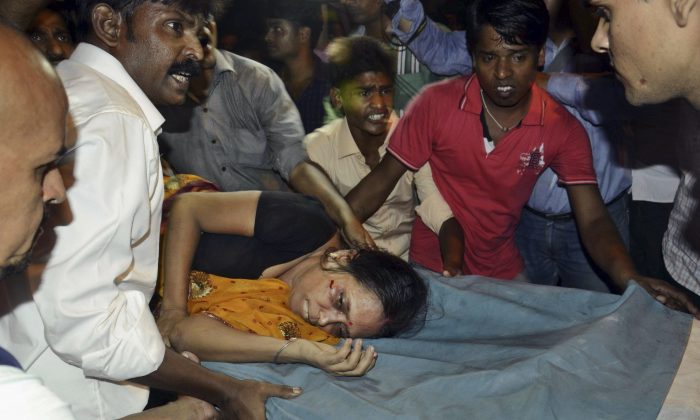 An Injured woman is carried on a stretcher to a hospital for treatment in Patna, India, Friday, Oct. 3, 2014. (AP Photo/Aftab Alam Siddiqui)
India

HYDERABAD, India—At least 27 people were killed and dozens injured Tuesday in a stampede during a Hindu religious bathing festival on a river bank in southern India.

The stampede occurred in Andhra Pradesh state as tens of thousands of people pushed forward to bathe in the Godavari River on the first day of the Pushkaralu festival, said Arun Kumar, a state administrator.

The stampede was triggered by some pilgrims who were trying to retrieve their shoes, which had fallen off in the rush to the river bank, police said.

Kumar said the incident, which occurred in the town of Rajahmundry, happened not long after the 12-day bathing festival started in the early morning hours.

An additional 34 people were hospitalized with injuries, Kumar said.

Festival participants believe a bath in the river can rid them of their sins, and many believe it is more auspicious to bathe on the festival’s first day.

V. Satyanarayana, a pilgrim who was at the site, said the stampede lasted nearly 20 minutes.

“It was a frightening situation, with women and children crying for help,” he said. “The policemen on duty were helpless and it took more than an hour to bring the situation under control.”

With the bodies of victims lying around, relatives wailed and cried for help.

Some pilgrims said ambulances took time to reach the site because the roads were overcrowded with people.

Officials said that a small place like Rajahmundry could not cope with the rush of hundreds of thousands of people, and that the situation became almost unmanageable.

Thousands of pilgrims, riding in buses, trains and other vehicles, started reaching the pilgrimage center two days ahead of the start of the festival.

“There is a false belief that taking a holy dip in the river on the first day of the festival will be more auspicious,” said Swamy Swaroopanand, a Hindu holy man. “It’s the same as taking dip on any other day.”

Indian Prime Minister Narendra Modi expressed grief over the tragedy, tweeting that he was “deeply pained” by it.

About 24 million people are expected to take part in the festival at varying points along the Godavari River, which flows through the two states.

In October 2013, a stampede in Madhya Pradesh state in central India killed more than 110 people, mostly women and children.