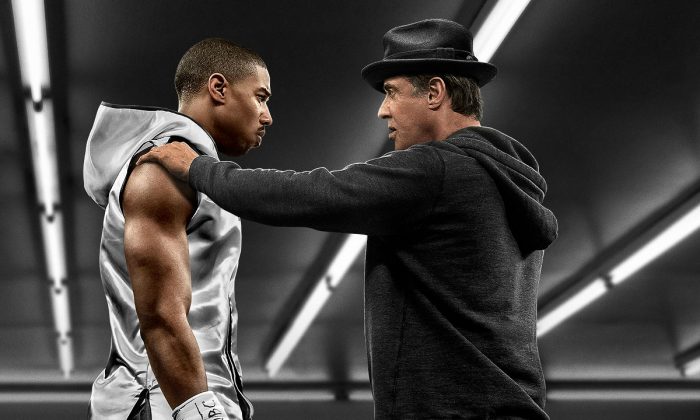 Actors Michael B. Jordan and Sylvester Stallone in a poster of the movie "Creed." (MGM)
Entertainment

Stallone Still Packs Punch With Rocky Fans Ahead of ‘Creed’

PHILADELPHIA—There’s a scene in “Creed” where the latest brash boxer who challenges the upstart protege of Rocky Balboa barks, “No one cares about Balboa anymore!”

Yo, through 40 years of Rocky as an underdog, champion, and aging, widowed fighter, fans sure do care.

Dressed in robes, fedora hats, and even boxing boots, the costumed enthusiasts chanting “Rocky! Rocky! Rocky!” on Friday had one more reason to cheer for Philadelphia’s favorite fictional son.

Sylvester Stallone goes one more round as Balboa in the spinoff “Creed,” and he wants the character to tally even more before he joins Adrian, Apollo, and Paulie in that great squared circle in the sky.

“There’s more to go,” Stallone said Friday. “I would like to follow this character until eventually he’s an angel.”

The 69-year-old Stallone, writer of the first “Rocky” that earned 10 Academy Award nominations including best picture, promised more movies based on Balboa and Adonis Creed. Creed is the son of Rocky’s heavyweight rival and beach-running friend, Apollo Creed, and the titular character who coaxed Balboa out of retirement and into a trainer’s role in the movie set for a Nov. 25 release.

Stallone and fellow “Creed” actors Michael B. Jordan and Tessa Thompson, writer-director Ryan Coogler and producer Irwin Winkler attended a celebration of the movie atop the Philadelphia Museum of Art steps.

Mayor Michael Nutter attended a screening Nov. 5 and said the movie should win an Academy Award for best picture. The “Rocky” series spawned six more movies, and all the films shared a common co-star with Stallone—Philadelphia.

“The movie put Philadelphia literally on the map,” Nutter said.

Stallone’s run through the Italian Market and up the museum’s 72 steps in the first movie propped both locations from local landmarks into iconic tourist attractions. A bronze statue of the hard-luck fighter stands at the base of the steps.

“Creed” opens a more modern Philadelphia to a new generation of fans: Johnny Brenda’s, Max’s Steaks, Front Street Gym. All take center stage in the new flick and so does newer lingo. “Yo!” makes way for “jawn,” a Philly word that can be used to describe anything.

When Los Angeles transplant Creed (Jordan) has his first cheesesteak with love interest Bianca (Thompson), she asks for “some peppers on that jawn.”

Thompson said she spent about two months around Philadelphia to add native authenticity to her character.

“There’s no better way to learn how to be a Philly jawn than just spend a lot of time in some Philly jawns,” she said.

Jordan was immersed for nearly a year in training for a movie that probably has more fight scenes than any of the first six movies.

“Did I get hurt? I took a few real punches, for sure. Thank Sly for that one,” said Jordan, who trained with fighters Andre Ward and Gabriel Rosado.

“I know, you deserved it,” Stallone said, laughing.

Rocky has become as much a Philadelphia institution as the Liberty Bell, and Stallone is always greeted with a frenzy normally reserved for its real-life sports heroes.

“I started skipping rocks in the Schuylkill River over there when I was 12 years old,” said Stallone, who lived in Philly as a teen. “So all you kids in the audience there, if you don’t think you can make it up these steps of life, which is kind of represented here by this museum, don’t you believe that. Because if I can do it, you can do it.”