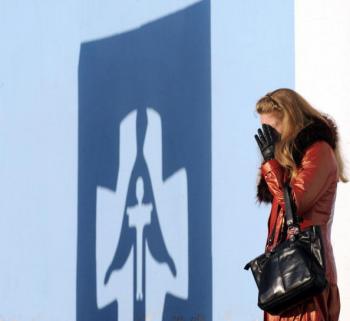 A woman cries as she visits the Holodomor Memorial on a sunny warm day in Kiev on November 11, 2008. (Sergei Supinsky/AFP/Getty Images)
Europe

Susan Hallett
View profile
Follow
biggersmaller
Print
Lighted candles will flame all over the world Saturday evening in remembrance one of history’s greatest atrocities. November 22nd marks the 75th anniversary of Holodomor, the Stalinist killing by starvation of at least 10 million Ukrainians.

The genocide of 1932 to 1933 has been covered up until recently and is denied today by many Ukranians and even by some Canadians of Ukrainian heritage.

Traditionally, the majority of the people in what is now Ukraine were Ukrainians, a Slavic people speaking a language akin to Russian. The rest were Russians and Poles. The geographic centre of Europe, Ukraine is known historically as the “Mother of all Russia.” The country has been a presidential-parliamentary republic since 1991 and is using Canada as a model for its democracy.

Long called the granary of Russia, it was once one of the chief wheat-producing regions of Europe and its land-owners, or kulaks, were very prosperous. Ukraine has one-quarter of the world’s fertile black loam and is blessed with a climate greatly modified by the Black Sea.

The dukes of Kiev, now the country’s capital city, were rulers of the first Russian state. They expanded southward in the ninth and 10th centuries, fighting as they went. The Kievan state then split into various principalities including Galich (Galicia) and Vladimir. The duchy of Vladimir was founded in 988. Conquest after conquest followed until in 1918 Ukraine declared its independence.

In 1922, however, it was reconquered by Russia.

Between 1931 and 1932, Joseph Stalin, who had lusted after the rich wheat harvests of the kulaks – but also after their land which he wanted to make into collective farms – had his goons confiscate the entire wheat harvest. This was done by force, and nothing was left for the farmers or their families. They had nothing to eat. The wheat was sold by Russia to western countries for a huge profit.

Tragically, and ironically, 1933 saw a bumper crop of grain ripen in the Ukrainian steppes. But by autumn, harvest-time all over Europe, no one was left to gather the precious sheafs of wheat. Stalin had exterminated 10 million Ukrainians by forced famine. This extermination by starvation joins the Holocaust as one of the world’s greatest evils.