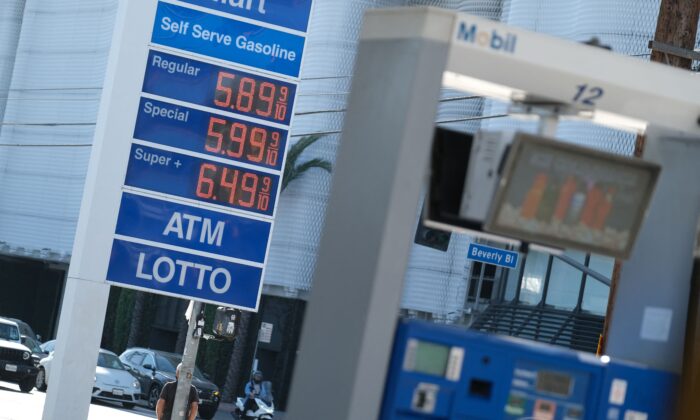 The high price of gasoline is displayed at a Los Angeles gas station on Nov. 24, 2021. (Chris Delmas/AFP via Getty Images)
Inflation

U.S. economic growth could be close to flat in the first quarter, the Federal Reserve Bank of Atlanta suggested in its latest model.

The Atlanta Fed Bank’s GDPNow estimate on Jan. 28 suggested that real gross domestic product (GDP) growth could be a minuscule 0.1 percent in the January-to-March period.

While it’s not an official forecast by the Atlanta Fed, the institution noted that “it is best viewed as a running estimate of real GDP growth based on available economic data for the current measured quarter.”

As a result, this could accurately represent what to expect in the coming months regarding the national economy.

“The GDP numbers for my first year show that we are finally building an American economy for the 21st Century, with the fastest economic growth in nearly four decades, along with the greatest year of job growth in American history. And, for the first time in 20 years, our economy grew faster than China’s,” Biden said in a statement.

“This is no accident. My economic strategy is creating good jobs for Americans, rebuilding our manufacturing, and strengthening our supply chains here at home to help make our companies more competitive.”

However, critics have pointed out that much of the growth that transpired in the previous quarter could be attributed to companies rapidly restocking their inventories. This has some market analysts warning of a sharp decline in the first-quarter GDP amid a potential slowdown or reversal in restocking and concerns over the Omicron coronavirus variant.

In recent weeks, stagflation has been the talk of Main Street and Wall Street.

Stagflation is a combination of the words stagnation and inflation. The term was first coined in the UK in 1965 to describe an economic situation characterized by slow economic growth and high inflation.

The last time the United States endured a severe bout of stagflation was in the 1970s. During this decade, the U.S. economy was going through a case of surging inflation, soaring energy prices, and significant levels of joblessness.

Is the specter of stagflation hanging over the United States in 2022?

What the Experts Forecast

Peter Schiff, president and CEO of Euro Pacific Capital, appeared on the Wharton Business Daily podcast to talk about the U.S. economy in 2022.

Overall, Schiff thinks the country is moving toward stagflation.

“A lot of the inflation was in financial assets, so stock prices were going up because of inflation, bond prices, real estate prices. That didn’t bother people because they thought inflation was making them rich,” he said.

Today’s conditions are worse than they were in the 1970s if the consumer price index (CPI) were measured the way it was back then, he said.

At the time, the CPI included housing prices. According to the S&P/Case–Shiller U.S. National Home Price Index, housing prices advanced by 18.81 percent year-over-year in November 2021 to $276,120. Or, using numbers from the National Association of Realtors, single-family home prices climbed by 17.3 percent year-over-year to $358,000 in December 2021.

“So it’s a big problem. And unfortunately, it’s going to get much worse,” Schiff said.

But rather than stagflation, could the United States suffer a recession?

Cathie Wood, founder and CEO of Ark Invest, believes that there’s a potential risk for a recession in the United States. In a recent letter to investors (pdf), she wrote that the financial markets will monitor this trend over the next three months.

“During the next three to six months the market is likely to focus more on the risk of recession in the United States, the serious slowdown in the Chinese and emerging market economies, and potentially a surprising drop in inflation,” the letter reads.

Speaking on a recent webcast, Gundlach, the billionaire “bond king,” noted that inflationary pressures are intensifying and that the broader economy has been “supported by the quantitative easing and the Fed’s balance sheet.”

“And since that’s going away, it is just not plausible to think that we don’t have more headwinds in 2022 for risk assets and, ultimately, for the economy. The signals from the bond market are starting to look a little bit like a pre-recessionary period,” he said. “We are going to be more on recession watch than we’ve been for the past two years.”

If an economic downturn does transpire, it will be challenging for the Federal Reserve because of its plans to raise interest rates from their historic lows.

At the end of its two-day Federal Open Market Committee policy meeting last week, the Fed signaled that it would pull the trigger on a rate hike in March.

It’s unclear by how much, but Atlanta Fed President Raphael Bostic told Financial Times that the central bank could raise rates by half a percent rather than 25 basis points.

“If the data say that things have evolved in a way that a 50 basis point move is required or [would] be appropriate, then I’m going to lean into that if moving in successive meetings makes sense. I’ll be comfortable with that,” Bostic said.

According to the CME FedWatch Tool, much of the market is penciling in a 25-basis-point boost to the current target rate.

But one investment analyst doesn’t think the country should be on stagflation watch.

“Our view is that stagflation is an extremely unlikely scenario in 2022,” Kristina Hooper, chief global market strategist at Invesco, said in a note, writing that the central bank will focus more on fighting inflation since it’s closer to achieving its full employment mandate.

Fed Chair Jerome Powell and the financial markets will be keeping a close eye on the January manufacturing data, job openings and quits numbers, and the January jobs report.