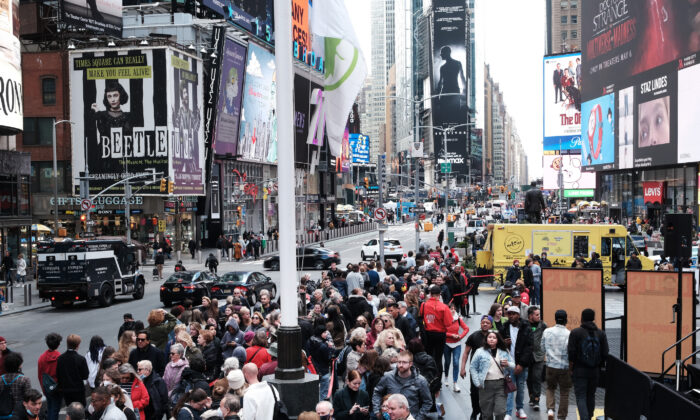 People wait in line to buy theater tickets in Times Square in New York City on April 27, 2022. Unlike other parts of Manhattan, Times Square is quickly returning to its pre-pandemic population with Broadway shows and area hotels at near full capacity on many nights. (Spencer Platt/Getty Images)
Economy

Stagflation or Recession? Economic Woes May Hang Over Post-Crisis US Economy

Another three months of negative growth in the output of goods and services after the U.S. economy unexpectedly contracted by 1.4 percent in the first quarter could send the world’s largest economy into a technical recession.

While recession clouds could be forming on the horizon, some market analysts dismissed the headline gross domestic product (GDP) reading in the January-to-March period, citing strong domestic demand. Consumer spending expanded 2.7 percent, residential investment increased 2.1 percent, and nonresidential investment swelled by 9.2 percent. The negative growth was driven primarily by a decline in exports, inventory rundowns, and a drop in government spending.

Still, financial experts concede that it wasn’t a good quarter for the post-pandemic economy, with rampant price inflation in nearly every sector. The data and trends have weighed on projections, too.

“We expect a more notable growth slowdown in 2023 and a rising unemployment rate, with elevated risk of a mild recession,” Nomura economist Robert Dent warned in a research note.

Does this mean stagflation is more likely to unfold over the next 12 to 24 months?

This economic event occurred twice in the United States in the 1970s, driven by sky-high energy prices, and government price and wage controls that restricted supply.

In response to inflation spiraling out of control, the Federal Reserve, led by Democrat Paul Volcker, raised the benchmark federal funds rate to 20 percent in June 1981 from 11.2 percent in 1979.

Speaking in an interview with Bloomberg News last month, Bank of Canada Governor Tiff Macklem rejected that this scenario could occur.

“A lot has changed since the 1970s,” he said. “Central banks are going to be much more ahead of it than they were.”

Europe could be on the precipice of stagflation. In the eurozone, the GDP edged up by just 0.2 percent in the first quarter, while inflation hit 7.5 percent in April.

In France, income growth has stalled and prices for goods and services have soared. The last time one of Europe’s largest economies witnessed a similar case was in the 1980s.

Back home, Ray Dalio, Bridgewater Associates founder and co-chief investment officer, is confident a stagflationary environment could be transpiring.

“I think that most likely what we’re going to have is a period of stagflation,” he recently told Yahoo Finance Presents. “So, what you have is enough tightening by the Federal Reserve to deal with inflation adequately, and that is too much tightening for the markets and the economy. So the Fed is going to be in a very difficult place a year from now as inflation still remains high and it starts to pinch on both the markets and the economy.”

What About a Recession?

If the United States slips into stagflation, what are the odds of a recession?

Economists and Wall Street are monitoring a wide range of flashing recession indicators.

In March and April, the yield curve inverted. This is when short-term Treasurys generate higher interest rates than long-term bonds. When that happens, it typically suggests investors are losing faith in the economy.

But not everyone is convinced that the yield curve is a reliable indicator in this type of environment.

“However, the problem today is that the yield curve has been distorted by the effects of large-scale central bank asset purchases over the past decade,” Neil Shearing, group chief economist at Capital Economics, said in a note. “These have compressed term premia and pulled down yields at the long end of the curve, thus making it more prone to inverting. We therefore suspect that the yield curve may have lost some of its predictive power.”

Some observers warn that quantitative tightening could have an effect on the post-crisis economy.

“The U.S. economy is quite strong at the moment, but there is indeed some risk of slipping into a recession,” Nikolai Roussanov, a finance professor at the Wharton School of the University of Pennsylvania, said in a paper. “Its length and severity would depend in large part on the Fed’s response, and I expect it to do all it can to minimize the damage.”

Fed Chairman Jerome Powell has stated that his objective is to achieve a soft landing: curb price inflation, support economic growth, and ensure that the labor market remains strong.

Even with waning fiscal and monetary support and elevated inflation, ING anticipates a rebound in the second quarter.

“While inflation is hurting spending power, nominal incomes are rising strongly and there are decent employment gains that in combination can keep spending firm,” James Knightley, ING’s chief international economist, said in a note. “On top of that, there is the legacy of higher savings accrued through the pandemic and large wealth gains caused by rising asset values that can additionally be used to keep consumer spending growing nicely.”

ING forecasts annualized growth in the range of 2 percent to 2.5 percent in the April-to-July period.

Goldman Sachs echoed that sentiment, expecting that the United States could avert a recession because of a strong labor market and “households are in better shape financially than they have been at the onset of most recessions.”

“The ratio of household-net-worth to disposable income is at a record high, the personal savings rate is elevated, pent-up savings are ample and Americans overall have a healthy financial surplus,” the bank wrote. “This means a slowdown in labor income growth is less likely to cause households to sharply cut back on spending than in some past cycles.”

Researchers at the Wall Street titan recently raised the odds of a recession in the next 24 months to 35 percent.