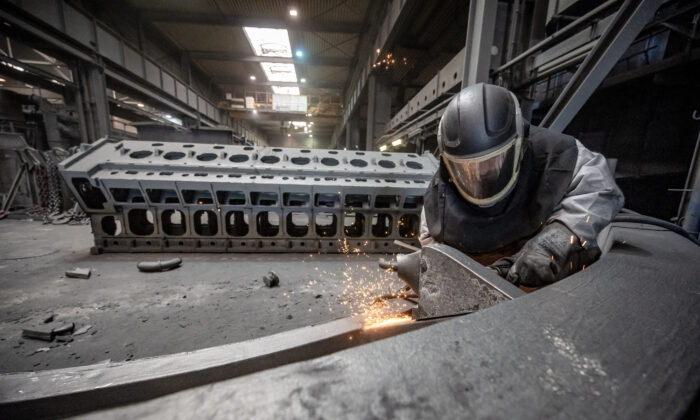 A worker deburrs a casting at the Siempelkamp Giesserei foundry in Krefeld, Germany, on April 21, 2022. (Sascha Schuermann/Getty Images)
Europe

German business sentiment slumped in June as headwinds from looming natural gas shortages and soaring prices crimped confidence, prompting analysts to boost the odds that Europe’s biggest economy will be rocked by stagflation.

The closely-watched Ifo business climate index, released on June 24, showed a slump in its current conditions gauge and sharp drop in its forward-looking measure, prompting Ifo president Clemens Fuest to remark that “sentiment in German business has clouded over.”

The current conditions component of the index fell to 92.3 points in June from 93.0 points in May. The forward-looking gauge saw a deeper drop to 85.8 in June from 86.9 in May, with Fuest saying that German business sentiment regarding the future had turned “markedly more pessimistic.”

‘It Won’t Be Pretty’

German officials fear that Russia might further curb shipments of natural gas amid tensions over the war in Ukraine, raising the prospect of energy rationing and another surge in prices in Germany as the peak-demand winter heating season looms.

“If we have a very, very cold winter, if we’re careless and far too generous with gas then it won’t be pretty,” Klaus Mueller, head of Germany’s federal network agency, said in an interview with public broadcaster ARD.

Germany on Thursday raised its gas risk level to the “alarm” phase, the second-highest alert level below the final “emergency” stage as concerns grew over gas supply security.

Economists have warned that if Russian gas flows to Germany are curtailed, this would drive up energy costs for manufacturers, forcing them to cut production.

“The German economy will definitely not plunge as it did during the 2020 lockdowns,” ING Global Head of Macro Carsten Brzeski wrote in a note. “However, consumer confidence is already in clear recession territory and today’s Ifo reading, as well as yesterday’s PMI reading, both suggest that the manufacturing sector is quickly following suit.”

The Ifo chief said that the manufacturing component of the index had taken a “significant hit,” adding that “rising energy prices and looming gas shortages are causing great concern for the German economy.”

“The chemical industry is thoroughly alarmed,” he said.

In an interview with Bloomberg Television on Friday, the Ifo chief said that “the likelihood of a recession is clearly increasing.”

“There’s a lot of pessimism about the gas situation,” he added.

ING’s Brzeski said that his team’s forecast for Germany is a combination of slow growth and high inflation.

“Stagflation for the rest of the year remains our base case scenario for the German economy, and an outright recession is our risk scenario,” he said.

“A weak Ifo reading in June should remind everyone that the German economy is feeling the full economic impact of the war in Ukraine, broader supply chain frictions, and higher inflation,” Brzeski added.

Consumer price inflation in Germany hit 8.7 percent in annual terms in May, while the Producer Price Index (PPI), a measure of business input costs, soared by 33.6 percent that month, a record high.

Since at least some business input costs tend to get passed along to end users down the road, German consumers are bracing for even higher inflation.