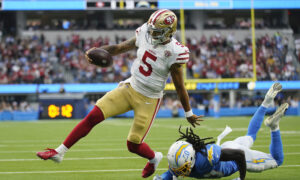 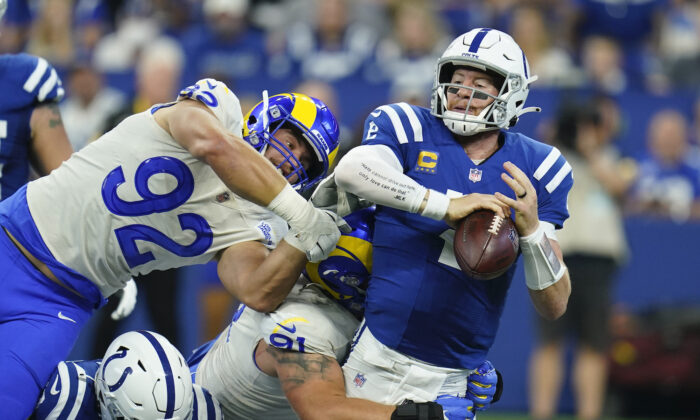 Stafford led the Rams on two late scoring drives, Matt Gay made a tiebreaking 38-yard field goal with 2:23 to play and the injured Wentz watched Indianapolis’ final two possessions helplessly from the bench as the Rams held on for a 27-24 victory over the Colts.

“I was as calm as you could be,” Stafford said. “It’s just doing whatever it takes to win the game. Last time I was here (in Indy), it was a two-minute drive and field goal to win it. I felt like ‘Why not go do it again?'”

While Stafford wasn’t nearly as crisp or efficient as in his Rams debut, he certainly played well enough — even after his throwing hand hit the helmet of DeForest Buckner during the first half. Stafford wound up 19 of 30 with 278 yards, two touchdown passes and one interception.

And it’s clear he’s already built a pretty nifty connection with receiver Cooper Kupp, who had nine receptions for 163 yards and both scores. It was the second-highest single-game yardage total of Kupp’s career.

The combination helped the Rams (2-0) improve to 5-0 all time under coach Sean McVay in road openers.

And things appear to be only getting tougher as the Colts embark on a three-game road trip to Tennessee, Miami and Baltimore — perhaps without their starting quarterback. Though Wentz wasn’t in a walking boot when he spoke to reporters, he said he felt sore and was upset he was watching Indy’s final two possessions helplessly from the sideline.

“It’s sore, it definitely feels sore. We’ll see how it reacts this week,” Wentz said, explaining he would need a scan of the injured ankle. “It’s a bad situation when you can’t finish, you kind of feel like you let your team down.”

Wentz certainly had his moments Sunday in leading the Colts back from an 11-point third-quarter deficit.

He made it 17-14 by finding Zach Pascal for an 8-yard TD pass and then Jack Doyle on a 2-point conversion and was cheering when the Colts took the lead after Rams long snapper Matt Orzech hit Nick Scott and the ball bounded into the end zone where Ashton Dulin recovered it for the Colts.

When Stafford answered with his second TD pass to Kupp to make it 24-21, Wentz returned the favor by positioning the Colts for a tying 35-yard field goal — on his final play.

Stafford, meanwhile, drove Los Angeles down the field again and set up Gay for the game-winner.

Wentz was 20 of 31 with 247 yards, one TD and one interception. Jacob Eason, Wentz’s replacement, was intercepted by Jalen Ramsey on his second NFL throw.