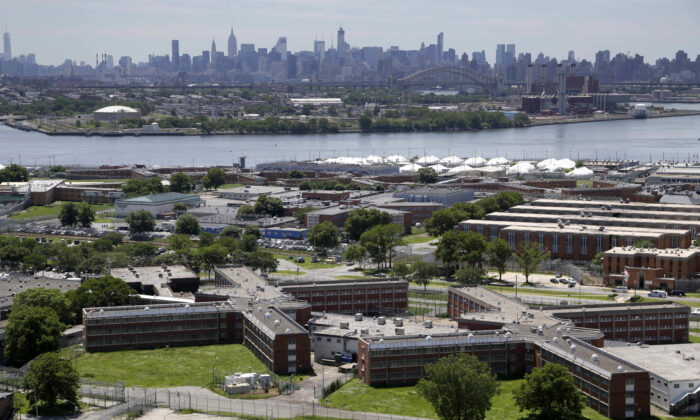 The Rikers Island jail complex stands in New York with the Manhattan skyline in the background, on June 20, 2014. (Seth Wenig/AP Photo)
NY News

The beleaguered New York City jail on Rikers Island has slipped to the edge of utter chaos due to staffing shortages, poor conditions, and restrictions placed on guards. The city is scrambling to bring in more officers, reduce inmate population, speed up repairs, and clamp down on officers who fail to show up for work.

The large jail complex on a small island in the East River has been criticized over disrepair and bad conditions for decades, but the situation has deteriorated further over the past few years. Fights, suicides, and attacks on guards have surged. Ten inmates have died so far this year. Drugs, cell phones, and even “wild parties” have been reported, with overworked staff sometimes unable to keep order.

The city plans to close the jail by 2026 and replace it with four smaller jails across its boroughs. The inmate population was supposed to be gradually reduced, but when the COVID-19 pandemic hit and courts shut down, the population increased instead.

Before the pandemic, there were about 700 inmates at Rikers who had awaited their trial for more than a year. That number has now more than doubled. Many of them have missed court dates because the overwhelmed personnel can’t find anybody to take them to court. Many have missed medical appointments for the same reason, according to jail authorities.

Despite some officers working triple shifts, the jail sometimes doesn’t have enough people to staff all posts. On Sept. 14, 70 units lacked a floor officer, meaning each was manned by a single officer from a stationary post, one of the city’s Department of Correction (DOC) officials said during a Sept. 15 City Council hearing.

Appalling sanitary conditions have been reported. Inmates live in filth and some even share bags to use as a toilet, according to the city’s Public Advocate Jumaane Williams who was among officials that recently visited the jail.

“I don’t think anybody there, working or housed, feels or is safe,” he said during the hearing.

Security has been at times near-impossible to maintain, based on hearing testimonies and reports in local media. In the young adult facility alone, more than 200 cell doors are broken, leaving inmates free to come and go. The repairs are expected to take until February, said DOC Commissioner Vincent Schiraldi during the hearing. He noted that before he took his post in June, the department estimated it would take two years to fix the doors.

This year there have been on average less than 6,000 inmates on Rikers any given day. That’s about half of what it was 10 years ago. With uniformed staff of over 8,000, why can’t the jail manage?

The main issue is that about a third of the staff is either on sick leave or has a medical exemption saying they can’t work directly with inmates, Schiraldi said.

Some of those officers have legitimate health issues, and some do not, he suggested.

The officers enjoy unlimited sick days and many, it appears, have been taking advantage of the benefit to avoid work.

Part of the reason is the series of reforms the city has put in place in recent years, Schiraldi indicated.

Since 2015, the city gradually banned the use of solitary confinement for those under 22 or with serious mental illness and scaled it back for everybody else. This kind of confinement, officially called “punitive segregation,” keeps a misbehaving inmate alone in a cell for up to 20 hours a day and up to 30 days.

If prolonged, solitary confinement becomes a form of psychological torture and can drive a person insane. Some activists call for getting rid of it altogether and the city government supports the idea. But the corrections officers’ union says the confinement is necessary to handle violent inmates and that restrictions on its use already go too far.

“We can’t keep them for more than 30 days, which makes us ask everybody ‘after 30 days what do we do with them? Especially if their behavior doesn’t change and isn’t modified?’” head of the union Elias Husamudeen said in 2019.

The city further restricted what officers are allowed to do when pacifying a violent inmate. Kicking is banned, striking the inmate’s head or face is banned, hitting the neck, kidney, or spine area is banned, neck restraints are banned.

Meanwhile, activists have been pressuring the city to ramp up disciplinary penalties against correction officers. The push has been fueled by high profile incidents, such as inmates dying allegedly due to staff negligence.

“The way this was perceived by our correctional officers … is that we were punishing staff more and incarcerated people less. And that did not feel good to people,” Schiraldi said.

“So there’s a lot of frustration around that and some lowered morale.”

The COVID-19 pandemic escalated the problem, he said. For one thing, restrictions imposed by the city in response to the virus cut visits, socialization, and programming for inmates, increasing the psychological pressure.

As the CCP (Chinese Communist Party) virus spread through the city, more officers started to call in sick for and the situation started to spiral.

Mayor Bill de Blasio recently announced several measures to alleviate the situation. NYPD officers will partially staff courts so some correction officers deployed there can transfer to the jail. Also, officers who fail to report to work without explanation would be suspended without pay for 30 days. There were about 100 such officers on Sept. 14. The city has contracted with a local hospital to check whether officers’ reported health issues are legitimate. The administration is also “expediting emergency repairs” at the facilities, Schiraldi said.

He called on the state legislature to pass a law that would minimize detention for “technical violations,” such as breaking of parole rules that doesn’t constitute a crime on its own. There are about 275 inmates at the island with such violations and releasing them would alleviate the staffing crunch, he said.

Meanwhile the city is trying to hire 600 more corrections officers. With the first academy class starting in October, some 75-125 new officers should report for duty in January, Schiraldi said.

The city went as far as to reach out to officers who’ve resigned or retired in recent years, coming up with several dozen showing interest in returning.

“The more people are productively occupied, the better facilities run and the better people do when they return home to their neighborhoods and their families.”

Rafael Mangual, senior fellow at the conservative Manhattan Institute, suggested expanding the use of solitary confinement in a recent New York Post op-ed. There’s no indication the city would consider such a step.

The DOC and the Correction Officers Benevolent Association didn’t immediately respond to requests for comment. The Mayor’s Office referred The Epoch Times to de Blasio’s previous remarks on the issue.

Update: The article has been updated with a response from the Mayor’s Office.