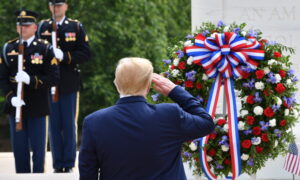 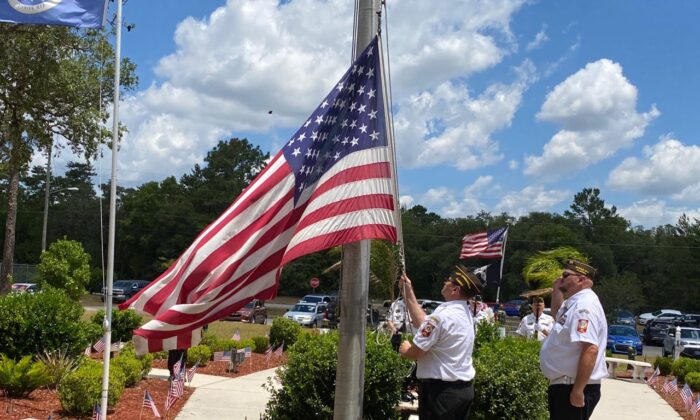 An American flag at VFW Post #10209 is lowered to half-staff in honor of America’s fallen on Memorial Day in Spring Hill, Fla., on May 31, 2021. (Patricia Tolson/The Epoch Times)
Regional News

Staff Sergeant Michael Wayne Schafer: He Was a Hero, ‘He Was My Son’

On May 31, around 150 people gathered before VFW Post #10209 located on Edward R. Noll Dr. in Spring Hill, Florida, to honor a man they call a hero. His name was Staff Sergeant Michael Wayne Schafer, but to Karen Barr “he was my son.”

Schafer was born to Karen and Mark Schafer in Spring Hill, Florida on Aug. 16, 1979. A year after graduating from Springstead High School in 1998, Shafer enlisted in the United States Army. After completing basic training and airborne school in Fort Benning, Georgia, Schafer joined the 82nd Airborne Division in Fort Bragg, North Carolina.

He was a paratrooper of the 2nd Battalion, 503rd Infantry Regiment, 173rd Airborne, a member of the so-called Chosen Company, and one of the first American soldiers to touch the ground in Kirkuk, Iraq.

According to his page on The Hall of Valor Project website, “Sergeant Schafer was fatally shot while clearing a house as part of a quick reaction force. Leading his squad into a building, he was immediately hit with gunfire. Before falling to the ground, he turned and pushed one of his Soldiers back out the door. He is credited with saving the lives of two of his fellow paratroopers. Staff Sergeant Schafer’s gallant actions and dedicated devotion to duty, without regard for his own life, were in keeping with the highest traditions of military service and reflect great credit upon himself, his unit, and the United States Army.”

Schafer was posthumously awarded the Silver Star and the Purple Heart.

“The idea of Memorial Day, originally called Decoration Day, arose from the ashes of the Civil War,” VFW Post #10209 Quartermaster John Coleman said during his opening remarks at Shafer’s dedication ceremony, and he noted how at least 620,000 Americans, both Union and Confederate, had been killed and hundreds of thousands more had been wounded.

“The war’s destruction was on a scale not even imaginable a few years before,” Coleman said.

“Nothing could ever fill the hole left behind by a fallen service member,” he shared further, his voice straining. “No number of medals or ribbons could comfort the family members and loved ones who served so proudly. That is why we are here today. God bless you all. God bless all our servicemen and women, and God bless the United States of America.”

Being one of many wearing a red T-shirt with Schafer’s name printed on the back, Michelle Coleman of Spring Hill, Florida, was there to honor Schafer and his family. She told The Epoch Times she was there to remember all those who served and sacrificed.

“I’m here to see our beautiful Post put in honor of Staff Sergeant Michael A. Schafer,” Coleman said, “and to honor his family and to support what we try to do here for our veterans every day in Hernando County.”

“I want to thank everyone for coming out today to honor our fallen and our veterans,” Kelly Anthony said, her voice breaking with emotion. Kelly also wore one of the red T-shirts.

“This day holds a lot of painful memories for me,” United States Jewish War Veterans Commander Larry Jasper told The Epoch Times. “I saw a lot of my friends die. I appreciate those who came out today but, unfortunately, I think a lot of people have lost the meaning of this day. For too many, today is about barbeques and retail sales.”

“It was one of the most beautiful ceremonies I’ve ever seen,” Ron McCombs told The Epoch Times, “and I’ve seen quite a few of them.”

“Memorial Day is not about veterans who are still alive,” McCombs said, standing at attention before a monument at VFW Post #8713 in Hernando County, Florida, which bears the names of The Brooksville Eight, who were killed in action during the Vietnam War.

“It’s about those men,” McCombs said, “the ones who didn’t make it.”

“He was my son,” Schafer’s mother Karen told The Epoch Times after the ceremony, holding a small American flag in her hands. “We’re here today because the VFW has renamed this post after our son, who was the first Hernando County soldier killed in action in Afghanistan. We’re very honored, and very humbled that this happened.”