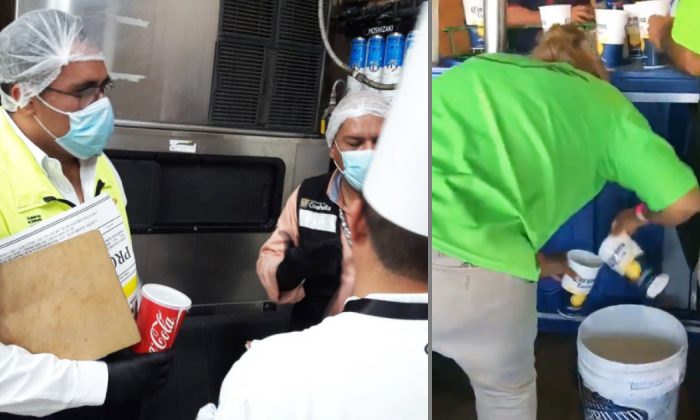 A soccer stadium operator slams food and drinks stand after this video emerges. It’s showing a worker recycling a left over alcoholic beverage and serving it to fans in Mexico, on July 29.

The video posted to social media seems to show a woman wearing a Corona Extra T-shirt pouring leftover beer from a paper cup into an empty paint bucket behind the stand at Torreón, 633 miles northwest of Mexico City.

The woman then scoops up the leftover beer and pours it into a new cup that appears to be ready for sale to the next customer. She takes turns filling and emptying the cup until she is satisfied with her work.

“If they do that in Poniente … I don’t want to imagine where they put the one in the east,” Cheko V commented on his video according to Google Translate.

TSM responded to the video by investigating the incident.

” … with the intention of having the necessary elements to take the pertinent measures in this situation, which we consider reprehensible in every way,” TSM said through Google Translate on Facebook. “It does not correspond to the levels of quality and requirement that we have sought for all those attending our facilities.”

If Eurest Proper Meals is found to be at fault, the business may well lose its concession to trade in the entertainment complex.
“That could result in some sanction and even withdrawal of the concession,” TSM said.

“We reiterate the commitment we have to provide the best show, permanently seeking greater efficiency both internally and with our suppliers.”

An Orlegi spokesperson confirmed the company would do everything it can to prevent a repeat of the incident.

“We are shocked and concerned that an independent contractor, which we have chosen based on their assurances of quality and service, a world-class concessioner such as Levy Group, offers such poor quality to our fans,” the company said in a statement obtained by Fox News.

@ClubSantosEn
This is the way how this football club makes money!
recycling left over of beer to be sold again and again,
this is the club that want to be an example of moral!
what a shame!! pic.twitter.com/Ruga29fziS

Orlegi is now hiring a different contractor.
“We are exploring our alternatives to assure that this will never happen again at our venue and will take all necessary action to prevent any inappropriate service to our fans,” the spokesperson said.

“We always put our fans and customers first. We are committed to their full satisfaction and the best quality in the services they receive from us.”