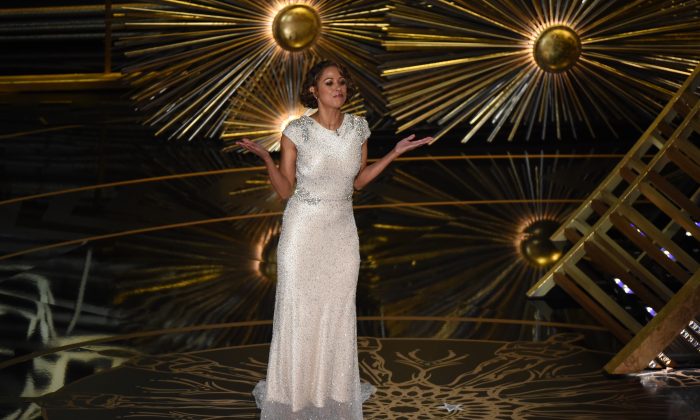 Stacey Dash has done it again.

In a blog post she wrote on Thursday, March 10, Dash let out her disapproval of Leonardo DiCaprio’s climate change awareness Oscars Speech.

“Quit being Chicken Little—the sky is not falling,” she said in the post. Still, she admitted his best actor win for “The Revenant” was “well deserved.”

The problem was what DiCaprio said after the win:

“Climate change is real. It is happening right now. It’s the most urgent threat facing our entire species, and we need to work collectively together and stop procrastinating. We need to support leaders around the world who do not speak for the big polluters or the big corporations, but who speak for all of humanity, for the indigenous people of the world, for the billions and billions of underprivileged people who will be most affected by this.”

He needs to get his priorities straight. I would leave him alone, except that his rhetoric isn’t cheap.
— Stacey Dash

The Fox News contributor said DiCaprio’s message was “too much.”

“He reminds me of Chicken Little, the bird who ran around the neighborhood and disturbed everyone ‘with her foolish alarm,'” Dash wrote.

Leonardo DiCaprio, quit being Chicken Little – the Sky is not falling. https://t.co/jUs6jH9IYT @LeoDiCaprio

“Before making a speech the world would hear, he should have double checked his facts,” she said, and then went on to cite Reason Magazine’s and Newsmax to back up her argument that humans do not affect global warming.

“DiCaprio is right that global average temperatures have been rising in recent years, but, as an article in Nature Climate Change just last week acknowledged, temperature has been rising much less rapidly than projected by most computer climate models,” Reason Magazine reported.

“If this lower rate were sustained, it would substantially undercut claims that the world faces an urgent and impending climate catastrophe.”

After going on at length with additional information on the Maunder Minimum (the term for the period roughly 1645 to 1715 when sunspots became very rare) and the Ice Age, Dash concluded: “There are people 10 miles from Leo starving, stuck on entitlement. Twenty-first century NAZIS to deal with and North Koreans playing with nukes.

“He needs to get his priorities straight. I would leave him alone, except that his rhetoric isn’t cheap.”

Dash is known for her controversial views, and is often referred to the public as the “clueless actress,” in reference to her role in the 1995 teen cult classic “Clueless.” She was against #OscarsSoWhite movement, which implied the lack of diversity in the film industry; she’s spoken out against Black History Month and the BET awards—claiming it promotes racial segregation.