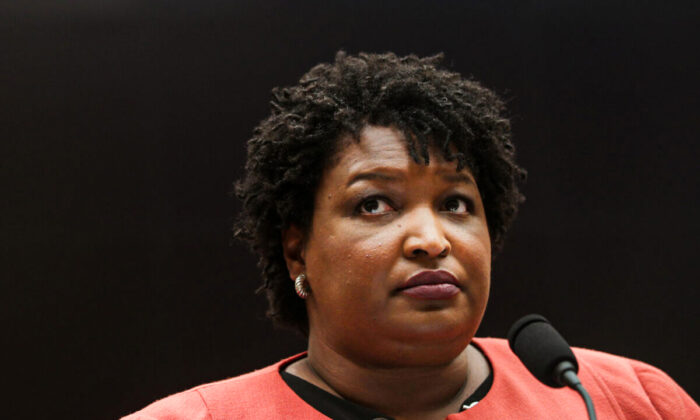 The Democrat in her apology said she had made a “mistake” when she posed for a photograph at Glennwood Elementary School in Decatur during a visit on Feb. 4, without wearing a mask.

“In the excitement after I finished, because it was so much fun working with those kids, I took a picture, and that was a mistake,” she added. “Protocols matter, and protecting our kids is the most important thing, and anything that can be perceived as undermining that is a mistake, and I apologize.”

The photograph was posted by the school principal. Abrams was the only person in the picture without a mask, including children and faculty in an indoor room.

Other pictures published by Outkick showed Abrams without a mask while everybody else in the room donned one.

Earlier this week, Abrams’s campaign issued a response on her behalf after rivals denounced the Democrat.

“It is shameful that our opponents are using a Black History Month reading event for Georgia children as the impetus for a false political attack, and it is pitiful and predictable that our opponents continue to look for opportunities to distract from their failed records when it comes to protecting the public health during the pandemic,” her campaign said in a statement.

Tate Mitchell, the Kemp campaign’s press secretary, criticized Abrams in a statement after the photograph circulated.

“Stacey Abrams wants state government mask mandates for Georgians and their children. But it looks like they wouldn’t apply when she’s attending a photo op,” said Mitchell. “This kind of hypocrisy is exactly why Georgians see her campaign for governor for what it truly is: a quest for more power.”

In similar remarks, Perdue hit out at Abrams for failing to wear a mask.

“We all know Stacey Abrams’ hypocrisy knows no bounds. Liberals’ thirst for power during this pandemic has caused enormous damage to our kids, while the elite like Stacey continue living their lives. What is even worse is that this is a classroom in Brian Kemp’s GA, not NY or CA,” he said earlier this week.

Abrams told CNN on Tuesday that it wasn’t yet time to discuss lifting mask mandates for schoolchildren in the state.

“Our job is to protect children. And I know that educators and parents have to balance protection and education, and that is a complicated issue,” she said. “I think each governor has to evaluate what’s happening where they are. We have to look to the CDC, but we also have to recognize we are shifting from pandemic to endemic. Some states will get there faster than others.

“My responsibility, if I am lucky enough to be the next governor of Georgia, is to look at the science, to follow the protocols and to set the right example. Right now that example is that we wear masks whenever possible, but we recognize that.”