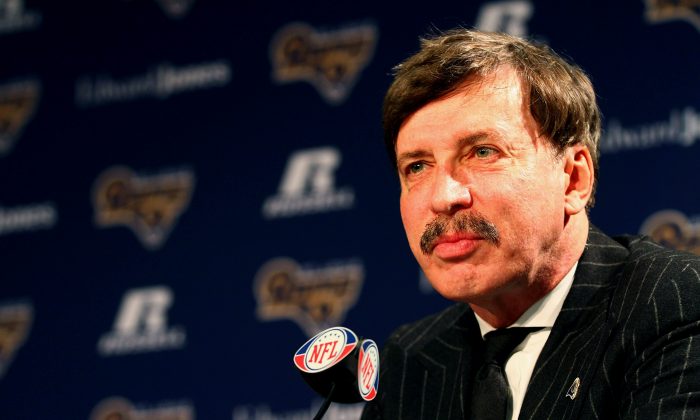 Kroenke is “said to be negotiating to purchase” for Hollywood Park, which is about 300 acres and isn’t being used for anything anymore, according to NBC.

There’s been a spate of rumors recently about the Rams potentially moving back to Los Angeles.

But it’s worth noting that Kroenke is the eighth-largest private land holder in the U.S. He also purchased 60 acres of property in Inglewood in January that could be suitable for a football stadium.

It was reported that Kroenke will be meeting with Inglewood Mayor James Butts Jr. later this year, which is sure to fuel speculation that he wants to move the team back to LA.

Butts told KMOV-TV a few days ago that he would be having the meeting but didn’t mention Kroenke by name.

“There’s no issues whatsoever with the players,” Fisher said, via Sports Illustrated. “We’ve not discussed anything with the players. Their focus as well as the staff’s focus is on the Arizona Cardinals.”

His comments came just after Missouri Gov. Jay Nixon said that he would work to try and keep the Rams in St. Louis.

“I think the NFL understands we are very serious here,” Nixon said last week, according to the St. Louis Post-Dispatch. “We are prepared to look at serious options to make sure we stay an NFL city.”

He added the Rams’ presence in the city is “a matter of civic and state pride, and one of international significance.”