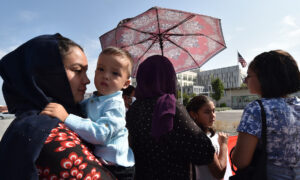 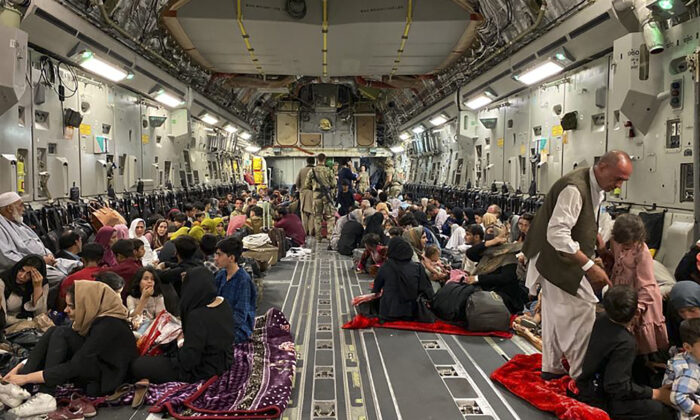 Afghan people sit inside a U.S. military aircraft to leave Afghanistan at the military airport in Kabul on Aug. 19, 2021 after the Taliban's takeover of Afghanistan. (Shakib Rahmani/AFP via Getty Images)
Regional News

Last week, the Department of Defense confirmed that the United States would be taking in up to 30,000 Afghan refugees. The Taliban took control of the country ahead of the United States withdrawal from the area, causing thousands to flee in fear of their lives, and now St. Louis is working to offer support for those who are displaced.

Mayor Tishaura Jones committed to welcoming at least 1,000 Afghan refugees. She announced a statement that declared, “We, as the leaders of St. Louis City and St. Louis County, have heard our community’s call to action to help these families. St. Louis has a long history of welcoming refugees and immigrants to the region, we are ready, willing, and prepared to lead the nation in inviting these Afghan SIV holders to our community.”

“St. Louis City and St. Louis County together are ready to welcome at least 1,000 Afghan citizens through the SIV program, and we will work with our community partners to support any additional migration to the region by Afghan families and friends to help with reunification efforts.”

The Epoch Times contacted Blake Hamilton, Senior Vice President of Programs at the International Institute of St. Louis (IISTL), to learn more about the details of this development. He noted that the IISTL works with the U.S. Committee for Refugees and Immigrants (USCRI) and local partners at the beginning of each year to determine how many refugees they can accept for the fiscal year.

They had already been approved to resettle 1,000 refugees and 50 SIVs, but are now being asked to allow additional SIVs in the current year and the upcoming year. This month alone the IISTL has already processed 35 Afghan arrivals.

Hamilton noted that they do not often get a lot of notice once approved, “Under normal circumstances we get 7-10 days notice. With the arrivals this month we have had less than 24 hours notice.”

As the situation in Afghanistan continues to unravel, the Afghan people are forced to either flee or face strict Taliban rule. The Taliban opened fire on protesters and began killing people with the bible on their phones. Some parents are so desperate they are passing children through crowds to get over airport gates in the hopes that they will reach safety.

On Sunday, an expectant mother fleeing the area gave birth on a flight to the United States.

These are only a few of the incredible stories coming out of Afghanistan which offer a clearer picture of American ties to the Middle East. As more refugees and SIVs come to St. Louis, stories of further challenges will come out.

Hamilton said “they have been through so much to come here and have a chance to restart their lives. They possess so much hope for themselves and their children. When they arrive it is the end of one journey and the beginning of another. Resettlement is a government-funded activity that only lasts 90 days. The process for a former refugee to fully settle into their new home takes much longer than that.”

But he noted that the process is not just rewarding for the people being granted aid. “For me, it is the fact that I get to live my values every day by welcoming these folks into our community and helping them restart their lives.”

In order to build stronger ties between the community and newcomers, St. Louis hosts the annual Festival of Nations which welcomes some 150,000 people at Tower Grove Park. In addition, they also offer cultural opportunities like pop-up dining events to encourage immigrant food entrepreneurs by allowing them to serve dishes from the homeland to the public and earn funding.

This year’s Festival of Nations will be limited due to COVID-19, but is set for Aug. 29 and spread out over a 9-mile garden.

When asked if he had anything to say to Americans who may be apprehensive about accepting Afghan refugees, Hamilton said, “In regard to Afghan SIVs, these are folks who worked with the US military. These are folks who put their lives on the line for their country and ours working alongside our veterans and dying alongside our veterans. It is not possible to obtain an SIV without a letter. It is our obligation to fulfill our commitment to them and keep them safe.

“Refugee resettlement to the United States is traditionally offered to the most vulnerable refugee cases including women and children at risk, female heads of households, the elderly, survivors of violence and torture, and those with acute medical needs. The process of refugee resettlement to the United States is a lengthy and thorough process that takes approximately two years and involves numerous U.S. governmental agencies. The process takes between 12 and 24 months and includes screening by eight federal agencies including the State Department, Department of Homeland Security, and the FBI, six security database checks and biometric security checks screened against U.S. federal databases, medical screening, and three in-person interviews with Department of Homeland Security officers.”

St. Louis is just one of many cities across the nation that will become home to thousands of Afghan refugees. Offering them the opportunity to find safety and shelter is something the United States has done throughout many crises in history.