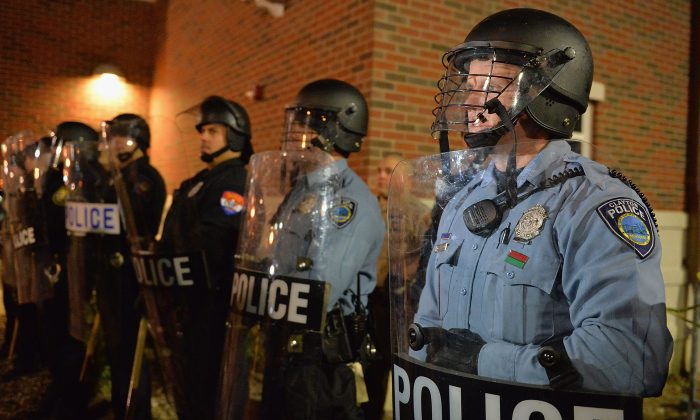 Police officers stand in riot gear during a protest on Nov. 19, 2014, outside the Ferguson Police Department in Ferguson, MO. (Michael B. Thomas/AFP/Getty Images)
US

ST. LOUIS—The St. Louis region is on edge in anticipation of an announcement from the grand jury that is weighing whether to charge police officer Darren Wilson in the killing of 18-year-old Michael Brown. The August shooting led to weeks of protests, some of them violent, and many people fear renewed violence after the decision, particularly if the panel does not issue an indictment. Some key things to know about the situation:

The grand jury has been meeting since August, reviewing evidence and listening to testimony related to the Aug. 9 confrontation that began when Wilson told Brown and a friend to stop walking in the middle of the street. St. Louis County Prosecutor Bob McCulloch said the panel’s final decision would come in November. A McCulloch spokesman did not return messages Thursday seeking information on whether the jury has finished hearing testimony.

Authorities have said the officer and Brown struggled inside the officer’s police SUV, and their confrontation spilled back onto the street, where the shooting happened. According to media reports, Wilson told the grand jury he feared for his life as Brown, who was 6-foot-4 and weighed nearly 300 pounds, came at him. But several witnesses have said Brown was surrendering and had his hands up.

Protests have been constant in Ferguson since the shooting. Though a handful of demonstrations have been in support of Wilson, the vast majority of protesters want to see the officer charged with murder. Many are also pushing for changes in the way police and the courts interact with minorities.

On Wednesday night, several protesters gathered outside Ferguson police headquarters. They were nonviolent, but noisy and periodically forced the street in front of the police station to close. Police made five arrests after the group shut down South Florissant Road.

Several protest organizers have been planning their response to the grand jury announcement. Earlier this week, one group put out a map showing more than three dozen locations for potential demonstrations. Other groups are planning protests in major cities.

Gov. Jay Nixon announced last week that more than 1,000 police officers had received special training ahead of the decision. National Guard troops will also be available if needed, and a unified command of state, city and county police will provide security for protests.

Police were criticized in August for being heavy handed with demonstrators. Several journalists were among those arrested. Nixon said police will work to protect the constitutional rights of demonstrators, but warned that those who turn to the “ugliness” of violence will face consequences.

Several school districts will be told in advance that the grand jury announcement is coming. The Hazelwood School District posted on its website last week that schools will get 24 hours’ notice before the news media if the announcement is on a weekend, and three hours’ notice if it is on a weekday. The notice is intended to allow schools to get students home before possible disruptions that could be caused by demonstrations.

Some districts are making plans for potential disruptions. Eleven Ferguson-area churches have agreed to provide meals, activities and a place for students to go if classes are cancelled.

The threat of unrest is having an economic effect on St. Louis. Organizers of some conventions slated for downtown are considering moving. Several office buildings in St. Louis, nearby Clayton and elsewhere have increased security, added guards and warned tenants about potential disruptions.

Country singer Hunter Hayes cancelled a Thursday concert at Saint Louis University over concerns about possible unrest, promising to reschedule in 2015. Many businesses on West Florissant Avenue, site of the most violent protests in August, have either boarded up their windows or never taken down the boards installed three months ago.