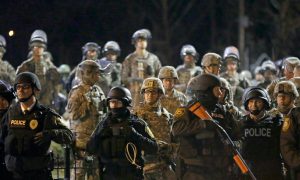 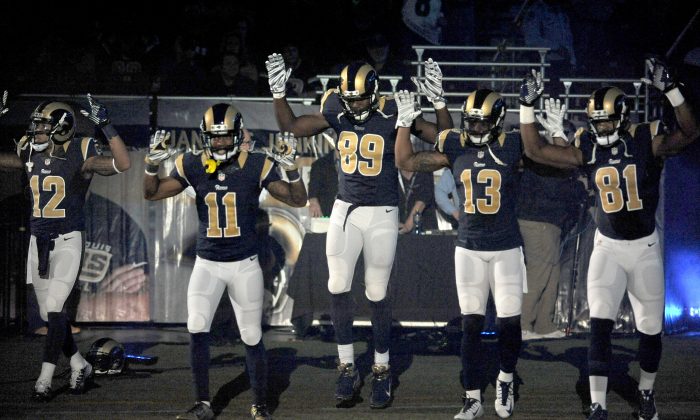 Members of the St. Louis Rams raise their arms in awareness of the events in Ferguson, Mo., as they walk onto the field during introductions before an NFL football game against the Oakland Raiders, Sunday, Nov. 30, 2014, in St. Louis. From left are Stedman Bailey (12), Tavon Austin (11), Jared Cook, (89) Chris Givens (13) and Kenny Britt (81). The players said after the game, they raised their arms in a "hands up" gesture to acknowledge the events in Ferguson. (AP Photo/L.G. Patterson)
Ferguson

On Sunday, November 30, 5 of the St. Louis Rams football players walked onto the field with their hands raised in the air, showing support for the Ferguson, Missouri inspired slogan “hands up don’t shoot”. This demonstration on national television immediately drew criticism from the St. Louis Police Officers Association. They demanded an apology from the demonstrating players and that the NFL discipline the players for the way they displayed their constitutional right to free speech. Part of the statement follows, via KSDK:

“St. Louis, Missouri (November 30, 2014) – The St. Louis Police Officers Association is profoundly disappointed with the members of the St. Louis Rams football team who chose to ignore the mountains of evidence released from the St. Louis County Grand Jury this week and engage in a display that police officers around the nation found tasteless, offensive and inflammatory.

“Five members of the Rams entered the field today exhibiting the “hands-up-don’t-shoot” pose that has been adopted by protestors who accused Ferguson Police Officer Darren Wilson of murdering Michael Brown. The gesture has become synonymous with assertions that Michael Brown was innocent of any wrongdoing and attempting to surrender peacefully when Wilson, according to some now-discredited witnesses, gunned him down in cold blood.

“The SLPOA is calling for the players involved to be disciplined and for the Rams and the NFL to deliver a very public apology.

Brian McCarthy, the NFL’s Vice President of communications, said on Monnday: “We respect and understand the concerns of all individuals who have expressed views on this tragic situation.” The NFL also stated the Rams will not be facing any fines.