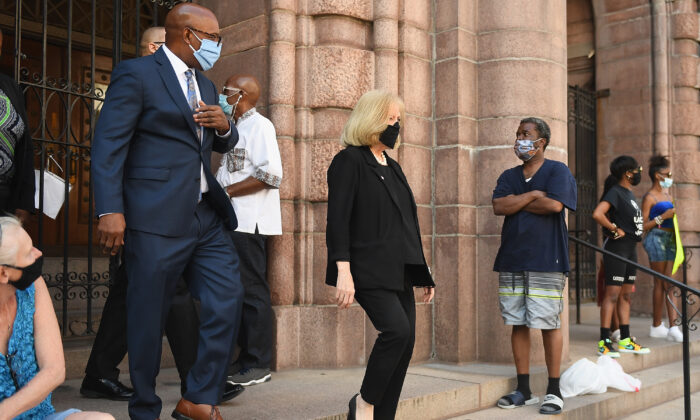 St. Louis City Mayor Lyda Krewson joins protesters as they demonstrate against police brutality and the death of George Floyd outside the St. Louis City Justice Center and City Hall in St Louis, Mo., on June 1, 2020. (Michael B. Thomas/Getty Images)
US News

St. Louis Mayor Lyda Krewson apologized after reading the names and addresses of several protesters who called to defund the police in the wake of George Floyd’s death.

In a Facebook Live briefing on the COVID-19 pandemic, Krewson, a Democrat, read the names and addresses of about 10 demonstrators during a question-and-answer portion. Someone asked her about a meeting she had with protesters outside the St. Louis City Hall.

Krewson said it “wasn’t really a two-way conversation … because there was a very loud response from the demonstrators.” Then, she read submitted suggestions that she was handed earlier in the day by the demonstrators, giving the first and last names as well as partial addresses of the protesters, according to KSDK.

Most of the activists’ proposals suggested that the city should budget zero dollars for the police department and give the funds to other programs, the report said.

On Friday, Krewson issued an apology for “distress or harm to anyone” but said the names and streets are “public information.”

“Tonight, I would like to apologize for identifying individuals who presented letters and comment cards to me at City Hall as I was answering a routine question during one of my updates earlier today. While this is public information, never did I intend to cause distress or harm to anyone. The post has been removed and again, I sincerely apologize,” she said in a statement.

Krewson said in the Facebook Live briefing that she doesn’t agree with defunding the police department.

“I agree with all these things, by the way — except we’re not going to take all the money from the police,” she said. “I think we need our police department.”

The video has since been deleted.

The ACLU of Missouri condemned her actions, claiming that it was intended to silence dissent. Local activists also called for her resignation and alleged the mayor was “doxxing”—or the publishing private information on the Internet with malicious intent—the protesters.

“It is shocking and misguided for Mayor Lyda Krewson of St. Louis, to broadcast the addresses of those who dare to express a different viewpoint on an issue of public concern. It serves no apparent purpose beyond intimidation,” wrote Sara Baker, ACLU of Missouri’s policy director, in a statement. “The chilling of debate should bother everyone, no matter whether they agree or disagree with the mayor on this particular issue.”

Amid the George Floyd protests, there have been numerous reports of the doxxing of people who expressed support for police officers, including high school students, at the hands of Black Lives Matter supporters.

Brynna Barry, 16, a student at a Catholic day school in Jacksonville, Florida, told The New York Times earlier this month that she was doxxed for supporting the pro-law enforcement Blue Lives Matter movement. “My own friends were commenting that I was racist, that they can’t support me,” she said. “Things travel fast. I’m nervous about my address getting leaked.”