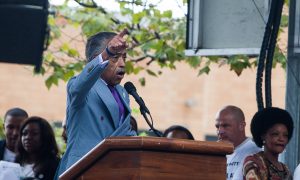 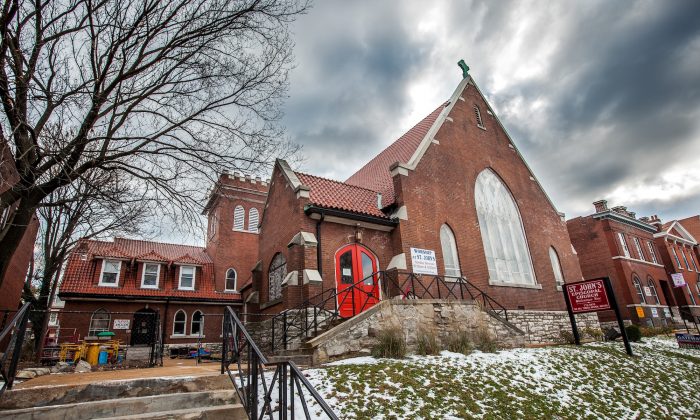 St. John's Episcopal Church in St Louis, Mo., on Wednesday. The church has been designated as a safe space for protesters. (Petr Svab/Epoch Times)
US

ST. LOUIS, Mo.—As this city continues to wrestle with what seems like an interminable wait for the grand jury decision in the indictment case of a police shooting of an unarmed black teenager in August, most residents are powerless to do anything but hope for the best and prepare for the worst.

At St. John’s Episcopal Church in the suburb of Shaw, the Rev. Teresa Danieley has been helping prepare for the church’s role to be a so-called safe space for protesters after the announcement comes. It is expected within a few days.

On Wednesday, she was modest in her assessment of the church’s provision of a physical space where people can come for food, water, rest, and other necessities like charging cellphones and using the bathroom.

“We just try to be there when we’re needed,” she said.

According to Deacon Kevin McGrane, the church’s dining hall, stage, and kitchen area will be available to the community within one hour of the grand jury’s announcement. They will stay open from that point on for 24 continuous hours.

“After that, we will take it day by day,” said McGrane, who speculated that the bulk of the protesting might not even occur in Shaw, but farther west in the suburb of Clayton or northwest in Ferguson. “We might be left sitting here, looking at all these bottles of water asking ourselves what to do with them.”

Activist Netta Elzie, who helps put out a daily newsletter with information about the most recent Ferguson-related updates, believes that safe spaces will be essential to protesters. The day of the announcement she plans to be at one of the three activist-designated safe spaces throughout the city for eight hours straight.

“All of them are necessary,” said Elzie on Wednesday. “We just expect people will need a place to go. It’s literally just a safe space where you can recharge yourself.”

Though activists have made a list of three safe spaces publicly available—St. John’s in Shaw, the Veterans for Peace Office in Clayton, and Greater St. Mark’s Church in Ferguson—the St. Louis city government said that it only formally recognizes the Shaw location. All locations were chosen for their proximity to planned protest sites.

“In order to ensure open lines of communication, Chief Dotson and I are going to meet with the pastor of the only church identified in the city as a safe house, St. John’s Episcopal Church,” wrote St. Louis Mayor Francis Slay in a letter to city aldermen on Nov. 18.

He also wrote, “We will honor safe houses, and consider churches to be sanctuaries, except in extremely rare circumstances.” He added that subterfuge, such as building inspections, will not be used to shut buildings down.

There are also other locations that haven’t been designated or publicized by activists or officials, but are part of the plan.

The Central Reform Synagogue told its members in an email newsletter that their building will serve as a place for “members and friends” to “come together and pray for peace and healing.” For the first 24 hours after the grand jury announcement they will remain open and staffed with religious leaders and volunteers.