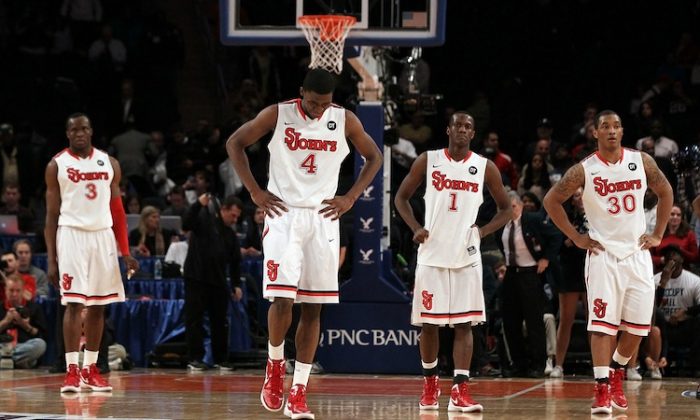 New York—Moe Harkless scored a team-high 25 points and grabbed nine rebounds, but it wasn’t enough as his Red Storm (13-19) bowed to Pittsburgh (17-15) 73–59 in the opening round of the Big East Tournament Tuesday at Madison Square Garden.

“The story was we had plenty of good looks, we just didn’t finish,” said Red Storm coach Mike Dunlap.

The loss likely ends the season for the Johnnies who shot just 33.3 percent (22-66) from the field.

Harkless was the exception, hitting 10 of his 16 shot attempts but starting guards Phil Greene and D’Angelo Harrison had a rough go of it, hitting just 4 of a combined 25 shots. In addition, reserve forward God’sgift Achiuwa missed all but one of his 10 attempts from the field.

Despite all that, St. John’s actually led 26–20 with five minutes remaining in the first half. To that point, Harkless (13 points) and Harrison (8 points) had 21 of the team’s 26 points.

The Red Storm suddenly went cold though as Pittsburgh outscored them 13–2 to end the first half. St. John’s never led again.

“We had them right where we wanted them,” said Dunlap regarding their first-half lead.

All is not lost though for the young Johnnies. With an all-freshman starting lineup and transfer guard Jamal Branch set to play next season, in addition to junior forward Achiuwa and any incoming freshmen, the future looks bright.

“The seeds are there,” said Dunlap. “Now to add to them and advance forward.”

How the advancement will proceed is unknown as head coach Steve Lavin hasn’t been on the bench since November as he recuperates from surgery. Lavin, who has been on the road recruiting in the meantime, has seen his team perform remarkably well, given the unusual circumstance of having to replace last year’s entire team.

Though venues like the Big East Tournament, where the lowest seeds would have to win five games in as many days, are hard on thin teams like St. John’s and their six-man rotation, winning more conference games than Villanova and Pittsburgh was an accomplishment in and of itself.

Next year, the bar will be higher.