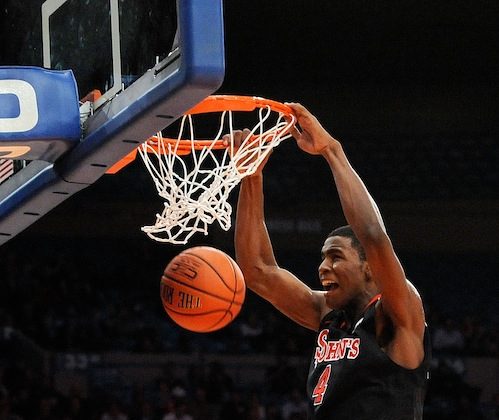 Moe Harkless is second among freshmen players in the Big East with an average of 8.8 rebounds per game. (Patrick McDermott/Getty Images)
College Sports

The St. John’s Red Storm (10–15) got a combined 44 points from their freshman duo of Moe Harkless and D’Angelo Harrison on Sunday, but it wasn’t enough as the Johnnies fell to Georgetown (19–5) 71–61 at the Verizon Center in Washington, D.C.

St. John’s had just six players log more than one minute of action, as the team is thin at guard following Malik Stith’s departure. The Red Storm have now lost three straight games and are in 13th place in the Big East at 4–9.

The Hoyas move to fourth place at 9–4 in the Big East after having five different players score in double-digits, led by forward Greg Whittington’s 12.