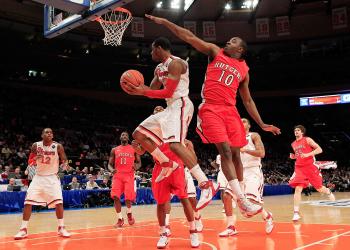 Dave Martin
Dave Martin is a New-York based writer as well as editor. He is the sports editor for the Epoch Times and is a consultant to private writers.
View profile
Follow
biggersmaller
Print
After St. John’s broke up a last-second inbounds pass to seal the win, forward Justin Brownlee grabbed the loose ball, took a few steps, and then threw the ball into the stands in celebration—and then time ran out.

All in all, the Red Storm (21–10) survived a no-call walk, stepping out of bounds, and throwing the ball out of bounds with time remaining (about 1.7 seconds) to beat Rutgers (15–17) and advance to the quarterfinals of the Big East Tournament on Wednesday. It will go down as one of the craziest endings ever.

“I felt like I just saw a ghost in the garden,” said a relieved St. John’s coach Steve Lavin immediately afterward. Lavin admitted he didn’t actually see the time with what had transpired at the end, and couldn’t talk much more about it until he viewed the replay.

What he’ll see is a not-so-pretty game overshadowed by an eventful final minute culminating in another win at the Garden for the Johnnies. But this was no ordinary win.

The Johnnies led almost the entire first half as Rutgers bricked their way to a dismal 27 percent (9–33) shooting, while the Red Storm made the same number of shots in 12 fewer attempts. The Scarlet Knights were able to stay close at the half though, 28–24, thanks to some offensive rebounds and some St. John’s turnovers.

The second half, however, started with a flurry of scoring. Rutgers guard James Beatty hit a trio of 3-pointers in the first three minutes to cut the Red Storm lead to 35–33 with 17:35 remaining. Beatty ended up with a team-high 15 points.

A minute later, Scarlet Knights leading-scorer Jonathan Mitchell was whistled for his third foul and had to exit the game. The senior forward had been in foul trouble for a significant part of the first half and finished with just 8 points, 6.5 below his season average.

At that point, the Red Storm made their run and by the time Dwight Hardy made a driving-layup with 8:40 remaining, the Johnnies lead had swelled to 53–43. It appeared the game was in the bag for St. John’s. Hardy scored a team-high 17 points but was just 5-for-17 from the floor.

The game wasn’t over for Rutgers, though. An 18–7 run, capped off by a 3-point play from guard Mike Coburn, gave the Scarlet Knights a 61–60 lead with just 58 seconds remaining. It was their first lead since the score was 3–2.

But the lead lasted for all of 20 seconds as a pair of Hardy free throws followed by a pair of Sean Evans free throws gave St. John’s a 64–61 advantage. Evans finished with 13 points and a team-high 9 rebounds.

Up three with 17 seconds remaining, Lavin elected to foul Rutgers immediately. “We played Rutgers earlier this year on our home floor and we didn’t foul in that situation … and sure enough they buried a three on us with maybe eight seconds to go in the game,” Lavin said.

The decision to foul backfired as Coburn made both free throws and the ensuing inbounds pass was uncharacteristically dropped out of bounds by All-Big East player Dwight Hardy. This gave Rutgers the ball back with 14 seconds left.

On the resulting possession, Coburn drove to the basket, hoisted a shot in traffic that missed and was rebounded by Brownlee. Coburn appeared to be fouled on the shot.

Brownlee was immediately fouled, but missed the front end of the one-and-one. But the ball went out-of-bounds off Rutgers, although Johnnies guard Paris Horne appeared to have committed an over-the-back foul while going for the rebound. No foul was called.

After D.J. Kennedy made a free throw (even as the horn inadvertently sounded), Rutgers had one last chance with 4.9 seconds left.

The half-court pass intended for center Gilvydas Biruta was broken up, Brownlee picked up the loose ball, took one dribble, ran out of bounds and threw the ball into the air—all before the game had ended. Meanwhile, the three officials were on their way up the tunnel, heading toward their locker room.

Rutgers first-year head coach Mike Rice was extremely gracious in his press conference: “It’s just something, three great officials … I’ve had them all throughout the year, impeccable reputations—a mistake. It’s unfortunate. Believe me, there’s going to be blood coming through my tongue right now.”

The Big East released a statement acknowledging there were two separate non-reviewable errors that occurred at the end of the game that should have stopped the clock and resulted in a change of possession. Meanwhile, NCAA Director of Basketball Officiating, John Adams, called the end of the game “unacceptable.”

The Johnnies will next play fourth-seeded Syracuse Thursday in the quarterfinals. Syracuse won the earlier meeting 76–59 at MSG.