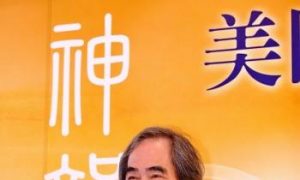 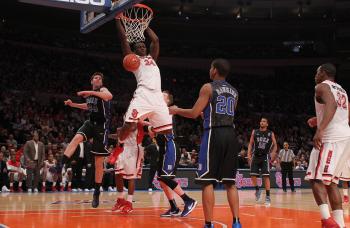 “The main aspect of the game was to come out and set the tempo on both ends of the floor,” Hardy said. “We were clicking early on offense and any time we’re clicking like that on offense, we just get extra energy and play defense as hard as we can.”

And it was St. John’s frontcourt that set the tone.

The Red Storm’s three bigs outscored the Blue Devils 38–13. That helped lead to outscoring Duke 50–30 in the paint.

St. John’s first half dominance shone through by holding Duke to 29.6 percent shooting. The Dukies would end the day with a 41.8 percent clip from the floor, while the Johnnies shot 58.2 percent.

In an unforgettable performance all around for the Johnnies, Burrell’s fondest recollection will be of his fellow senior forward.

“The memory I’ll take away from today would be my teammate Sean Evans,” Burrell said of Evans who scored 10 points after averaging 1.8 on the year.

“It’s been a tough year for him. He’s worked extremely hard, but the ball hasn’t bounced his way a lot, so we’re really excited about him coming out and playing the way he did today. And he really lifted our team today.”

But Burrell and the Johnnies know the nostalgia can’t last long. Coming in to the Duke game after losing five of the last six, they still have a lot of work to do to make the NCAA tournament.

“It helps out a lot, confidence wise, and of course when they look at our resume, it helps a lot,” Burrell said. “But at the end of the day it only counts as one win so we have to out and continue to win more games in order to be a contender to be able to play in the NCAA tournament.”

Follow Matt on Twitter @MattSugam and tune in every Friday from 6 p.m. to 8 p.m. EST on WRSU-FM as he cohost’s Scarlet Fever discussing Rutgers, Big East basketball, football, and other New York sports.