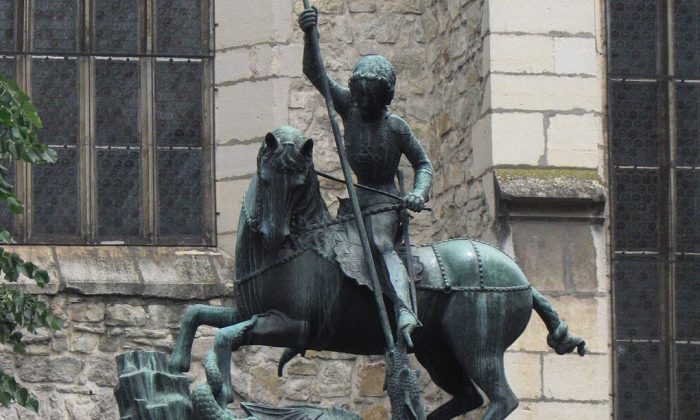 A copy of the statue of St. George Slaying the Dragon in Cluj, Romania. Bronze, erected in 1904. (Wikimedia commons)
Art Speaks

There’s always something special in the air every time we get across a statue of St. George slaying the dragon. Its compositions are some of the most dynamic, alive, and tense. They inspire us with his heroism, determination, and will to save the people from that bad dragon.

We feel at ease while realizing again that evil gets his divine retribution. But there is a statue of Saint George that tells us even more, and that is the “St. George Slaying the Dragon” statue from Prague’s National Gallery.

This old and small gothic statue is the first known equestrian statue that wasn’t linked to a particular building and that decorated an open space. It was cast in 1373 by two Romanian sculptors from Cluj, Martin and George, at the order of King Charles IV, on marrying his son, Sigismund of Luxemburg, with Mary of Anjou, daughter of the Hungarian king, Louis the Great.

After having been moved from place to place throughout the Prague Castle, the statue finally found its place in font of the south gate of the St. Vitus Cathedral, close to a small fountain.

The two Romanian brothers represented the fight between Saint George and the dragon in a composition full of surprising liveliness for that time. The composition is tense, and no matter from what angle you view it, it seems to have one focal point: the spot where the spear disappears into the dragon’s mouth. Even the horse flexes his neck and looks at the defeated dragon, which, like in a last attempt to escape danger, twists his tail around the horse’s foot.

The statue also surprises the viewer in other ways. For example, the knight’s armor is the same texture as the dragon’s scales. Another curious factor is that George’s body is one of a boy. His head is bigger in proportion that the one of an adult and the area below his rib cage is very thin. Intrigued by these particularities, some art historians and philosophers postulate that some details of the statue were inspired by the mural paintings of the 13th Century.

The face of the knight is looking downwards at his dying victim with great calm and serenity. This attitude contrasts greatly with all the effort and dynamic that the characters are involved with.

Centuries later, in commemoration of the two Romanian sculptors, Emperor Franz Joseph offered a gypsum copy of the Prague sculpture to the hometown of Martin and George. This can now be visited in the lapidarium of the National Museum of Transylvanian History. Another gypsum copy is exhibited in the National Museum in Budapest. But Romanians wanted to also have it in bronze, so after some long disputes in negotiating the price, a copy in bronze was unveiled in St. George Plaza of Cluj (now Lucian Blaga Plaza) in 1904.

The original statue from Prague had been taken down and a copy put in its place in 1967. The original can still be seen and admired at the National Gallery of the Czech Republic.

Bogdan Florescu is a Fine Arts graduate at Arts&Design University in Cluj-Napoca, Romania. He followed the graphics specialization and now he’s running his own business in advertising field.