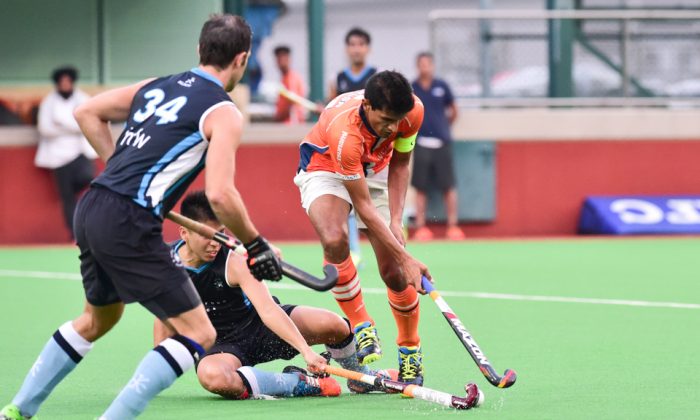 HONG KONG—This was always going to be the week when the top of the standings deadlock between SSSC-A, HKFC-A and Khalsa-A was going to be broken.

It could have been foreseen that the firepower of SSSC would prevail over HKFC-B, but the outcome of the top of the table clash between HKFC-A and Khalsa-A was unknown and bound to be fiercely contested.

Playing first at HKFC the Club B side put up a good performance but in the end the pressure from SSSC top players forced a 6-1 win to take them onto 21 points in the 2016-17 HKFA Premier Division season.

The stands were full and people were waiting at the perimeter of the ground eager to see the top of the table confrontation between HKFC-A and Khalsa-A – both on 18 points prior to the game. A win would keep one of them at the top of the standings with SSSC, draw or loss would drop them back.

The highlight match was hotly contested from the start, fast skillful play by both sides attacking the others’ defences when they were in possession. Flying tackles were common-place throughout the match to snatch the ball from attackers. Skidding dives towards goal were also seen to try to deflect into the net high speed balls driven across goal.

However, the score stayed all square at 0-0 for the first 15 minutes of the match until HKFC players forced their way close to goal and a half chance was pushed into the Khalsa goal by Istiaq Ahmed and this score prevailed into the 2nd half.

Club had to defended stoutly under repeated attacked as Khalsa put in much effort to equalise the scores. The frequent elusive runs by the Khalsa attackers, that would normally pass many players, were stopped in the final quarter of the pitch. Khalsa’s mid-fielder with great vision, accurate passing and skillful play made openings, but attempts failed to reach the goal.

It was not until Khalsa had a penalty corner 10 minutes into the 2nd half that Khalsa got onto level terms. The initial shot was blocked by the KFC goalie but Arshad Mohammad the corner taker, coming in from the side slotted the ball into the HKFC goal.

It was still a match of intensive hockey with both sides giving their all. But as the match wore on, the fitness of the Khalsa players began to tell. They began to make more attacks and forced the occasional penalty corner, but strong defending kept the ball out of goal.

HKFC were relying more and more on defence and then quick breaks to try to break the deadlock, while Khalsa were pressurizing the opposition continuously. Although chances went begging, there were no more goals but in the final few seconds of the game HKFC sent a high ball up-field straight towards the Khalsa goal – it was 50/50 between the advancing goalie and the HKFC forward Yan Lee Adams, the ball bounce over the goalie and Adams tried desperately to deflect it to the goal but it was just out of reach. The final score was 1-1 leaving HKFC and Khalsa on 19 points, 2 points behind SSSC.