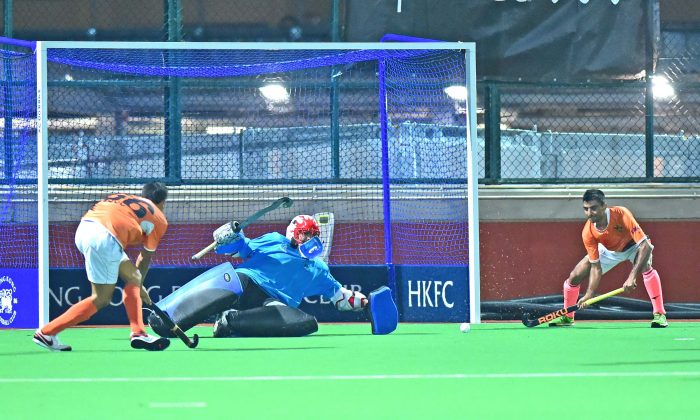 SSSC-A’s Amritpal Shing Gill calmly passes the ball across the HKFC-A goalie for his colleague Muhammad Jaffar to slot the ball home for their winning goal in the HKHA Premier Division match at HKFC on Sunday Nov 13. (Bill Cox/Epoch Times)
International

HONG KONG—SSSC-A have maintained their lead position at the top of the standings in the HKHA Premier Division after beating HKFC-A 3-1, on Sunday Nov 13. Khalsa-A in the meantime completed a 6-3 win over KNS-A to move them onto 22 points, but leaving SSSC-A in the lead position on 24 points.

HKFC-A are on 19 points and if they secure a win against Valley-A in the final match of the first half of the season they will finish on 22 points at the half-way stage.

The most crucial match of the 1st half season will be on Dec 4 when Khalsa Play SSSC at King’s Park, this will be the final shake-up match of the 1st half season, to decide who will lead at the half-way stage, and may be significant for the whole 2016-17 season. A draw between these two top teams will leave Khalsa on 23 points and SSSC on 25 points. Should Khalsa win, the table will tighten to only 1 points between the top 2 teams, but if SSSC win it will put them at a huge 5 points clear over Khalsa at the top – it is a BIG MATCH.

Last Sunday’s match between HKFC-A and SSSC-A was not the greatest for HKFC-A. Club struggled to cope both in attack and in defence against fast, skillful, very fit, SSSC players. HKFC were short of men up front when on the attack and in a similar position when defending. SSSC on the other hand assembled good support at each end of the pitch. Although SSSC took the lead from a penalty corner, 13 minutes into the match,  Club were able to maintain that position for much of the half and even secured an equalizer 6 minutes before half-time with a penetrating move up the left wing, worked into the goal area, hit across goal and deflected into the net in a spectacular fashion. Club players and their supporters were delighted with the fine play.

The 2nd half was still hard fought with good attacking and defending but as time wore on the attacking success of SSSC was beginning to show and they were rewarded with 2 goals to make the final score 3-1.

The result in the other match at HKFC, KCC-A edged HKFC-B 3-2 in a closely fought game which could have gone either way. There were not many attacks on goal until towards the end of the first half, but KCC were 1st to score 10 minutes from halftime with a good run into the goal area and a back stick hit across goal deflected and goal-ward by Kam Shung Hin. HKFC-B drew level before the break in a similar manner. In the second half KCC edged ahead, but HKFC-B again pulled the game back all square, with 22 minutes left on the clock. But KCC secured a 3-2 decider 5 minutes later. Ahmed Ewis again showed his composure at the back and an aray of  super distribution skills, way above the level of normal play.